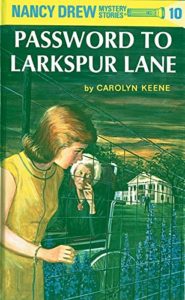 In her tenth adventure, Password to Larkspur Lane, Nancy tangles with some truly vicious criminals, finds out the meaning behind a strange code, and has an adventure involving kidnapped doctors and carrier pigeons. Only Nancy could have a mystery hand delivered to her from the sky. A bedraggled carrier pigeon, dropped from a plane, lands in Nancy’s outstretched hands, and as she nurses the wounded bird, she discovers a strange coded message coiled around its leg.

Meanwhile the family doctor has his own secret and despite the danger to his life, divulges his kidnapping. He was abducted, blindfolded, threatened, and taken to a secret location to administer to an elderly lady. He doesn’t know who she is, he just knows she’s in trouble. When she slips him some unique jewelry, he recognizes it as a clue, but only Nancy can follow it back to the source. 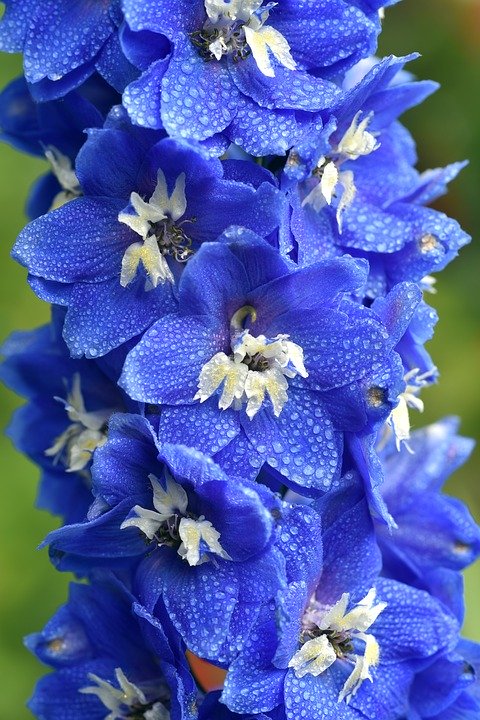 Password to Larkspur Lane is both oddly more serious than the other Nancy books and yet distinctly sillier too. We accept a certain amount of unreality – teenage Nancy is the detective everyone turns to, above the police, and she manages to fight crime and win flower contests at the same time. Titian haired Nancy with her remade 50s wholesomeness (I’ll refrain from the spiel about the 30s versions and the reworked, Flashlight bound 50s versions, by book ten you know that story) is forever the belle of the ball. And with this fancifulness comes some easy wins. There is usually plenty of solid sleuthing (usually), but answers also have a convenient tendency of finding Nancy at the critical moment. Password to Larkspur Lane is no exception, but it does amplify some of these tendencies.

From the beginning, the fowl pall is a stretch, not because of the antiquity of the narrative, but because Nancy is a bit too much of an expert. She has the early line of “I’ll wire the International Federation of American Homing Pigeon Fanciers and give them the number stamped on the bird’s leg ring.” Come on Nancy, there is no way you knew that . . . 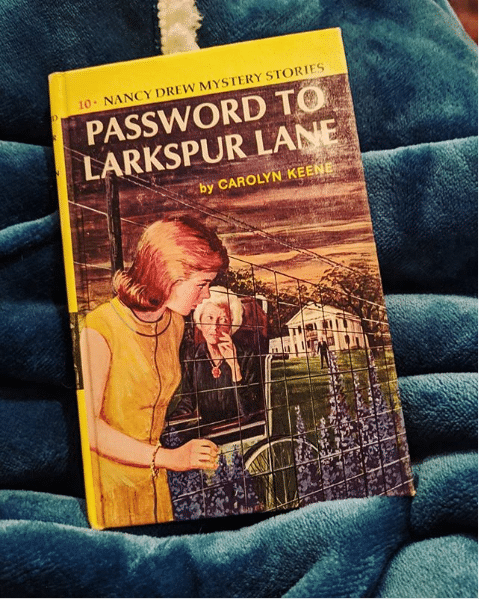 As Nancy and gang, including their boyfriends who are lifeguarding nearby, begin to poke around, the doctor’s story comes together. His clues and those of the banded pigeon come together. They are looking for the same criminals and those criminals have a helpless hostage. Again, the idea that despite the viciousness of the threat the doctor will reveal all to a teenage girl, even one as knowledgeable as Nancy, is a bit of a stretch. The sleuthing itself this time is more hit and miss. The way Nancy looks is by driving around trying to spot larkspur (which is apparently delphinium, thank you Google). It’s just too convenient and frankly, Nancy is better than this. Despite her usual serendipity and timeliness, she is nonetheless an impressive gumshoe.

The final criminal ring deals with elder abuse, a surprisingly serious subject matter for Nancy and company and a good one to introduce, gently, to its readers. Yet, the entire evil empire doesn’t ring true, despite its complexity and a heart pounding well scene where even Nancy becomes human and feels fear. There would, easily, be a better way to wriggle money out of these greedy grannies without half as much effort from the villains, and frankly this sort of scheme would soon enough fall apart with that many people involved. It doesn’t ring true, especially when you throw in a full consort of staff and airfields. It is grand, and gives some more than heart pounding moments in the end, by the usual carefulness and thoughtfulness of this nonetheless simple hearted series is missing. Nancy fans will still, of course, find plenty to love, including Nancy’s one moment of near imperfection, but this isn’t the best of the series.