Mystery of the Ivory Charm, The 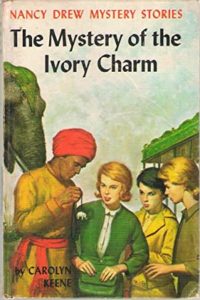 Image from the 1941 edition, which captures the critical meeting between Nancy and Rai.

Nancy and the Mystical

(This review is for the original 1930s version).

When a giant snake gives Nancy the squeeze at a train station, a dangerous new adventure begins. This time the mystery goes all the way back to India and involves a shifty circus, a malicious animal handler named Rai, his abused boy assistant (Coya), and a woman named Miss Alison who owns an eerily empty circus house and claims to see visions. Tying everything together is a rare ivory charm that is said to possess magical powers and bring good luck to the wearer.

This is my first encounter with the original Nancy Drew stories, prior to the sanitization of the Flashlight editions, produced in the 50s and 60s. From what I’ve read, the two versions of The Mystery of the Ivory Charm aren’t that different, however, and both editions present an especially weird adventure for Nancy: one that doesn’t entirely tie together. 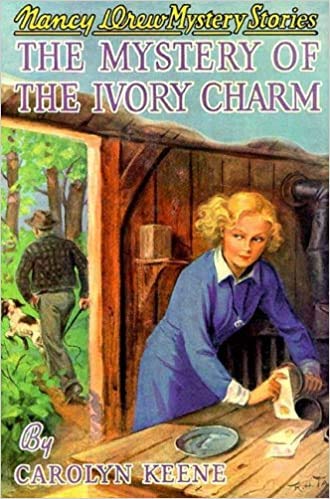 This is the original cover, with a very 20s looking Nancy. Note that she is wearing the charm.

Rai, the vicious animal handler, gives Nancy an ivory charm to smooth over her encounter with his escaped reptile and to ease her ire about how he treats his young assistant. No sooner does Nancy have the charm than the boy, drawn by her kindness, escapes the circus and tracks her back to River Heights, giving her a strange story about his heritage. Coya claims he is the rightful Maharaja of India, but he can’t shed much light on how he got to America, and the Drew’s put down his claims as the delightful fantasy life of an energetic and intelligent child. They’re determined to help the bright boy, and soon Coya becomes a fixture of the Drew family (and also, unfortunately, a sort of servant.)

Meanwhile, Rai discovers his missing charge and instantly regrets giving Nancy the necklace. He is determined to find the girl again and reclaim his property. Just as he launches his campaign, Nancy follows her nose to understand Coya’s past and reunite him with his family. The trail leads to an abandoned house, set-up for aerial circus performers, an intricate web of underground tunnels and, of course, priceless treasure.

As the story unwinds, the narrative gets weird, with a lot of unexplained asides, such as this empty circus house in the woods, pointless underground tunnels, and adventures into 1930s new age spiritualism/reincarnation. Many of the elements that are introduced are contradictory, simply ridiculous, or completely unconnected to the rest of the story. Rai gives Nancy the special necklace and instantly regrets it, leaving readers to wonder why he would part with such an integral artifact to begin with. The empty circus house and Miss Alison’s involvement never quite make sense either and we only understand on a vague level that somehow Alison and Rai are tied together as co-conspirators. The ivory charm is both a superstitious doo-dad and an elixir to raise the dead (I know, I know), and Miss Alison is both insanely jealous of her treasure and dismissive of it in turns. 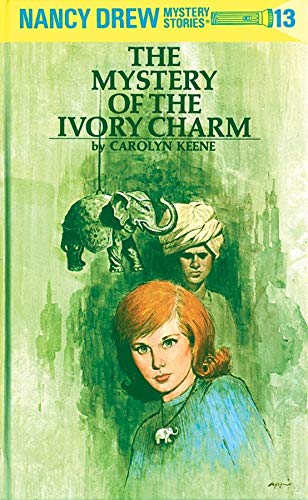 “Modern” Nancy with her epic necklace and a very unhappy Rai lurking in the background, from the Flashlight edition.

Where the story excels is in the depiction of Nancy and her friends (irritatingly and constantly referred to as “chums,” which I guess was the lingo for cool cats back in the day). The 1930s Nancy is just as endearing as the more familiar 50s figure, plus a bit more daring and adventure loving. For the 30s, Nancy was surprisingly progressive. Coya is also an intriguing character, although he does suffer the inconsistencies of the narrative and the occasional desire for stupid danger that doesn’t add anything. Still, it’s hard not to root for the boy, despite the escalating strangeness of a story that gets too complicated and grand for its own good.

In the end, The Mystery of the Ivory Charm is fun, and there are lots of lovable Nancy moments, but it’s a weak spot in the series and far too outlandish. Nancy and her friends, plus the lovable Coya, keep the story going despite its peculiar run-away plot and the lack of any kind of connective glue between the villains and the background scheme. It’s fun, a must for Nancy lovers, but as a stand-alone, not an especially good adventure. Perhaps the 50s re-write cleaned the inconsistencies up, but from what I’ve read that looks doubtful, especially where the semi-magical charm is concerned.