Secret of Shadow Ranch, The 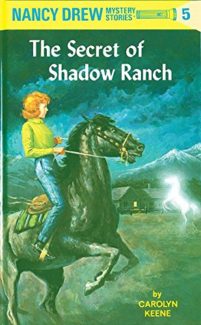 Nancy Drew in the Wild West

As a pre-teen, The Secret of Shadow Ranch was one of my favorite Nancy Drew adventures. When I settled into my childhood home, reading on my comfy bed under the open eyebrow window with the giant sycamore rustling excited leaves outside, Nancy’s western adventure caught me in a way none of her previous forays had. Now, at thirty, I still remember this vividly. Under the spell of returning nostalgia, helped by fall days and the colorful faces of mums, I’ve once again taken a Wild West journey with Nancy where outlaws, romance, and phantom horses prevail. Some books – some series – just demand a second reading.

It begins when Nancy’s vacation (accompanied by friends Beth and George) to Shadow Ranch in Phoenix Arizona is suddenly interrupted by peril. Local lore has it that the ranch is cursed and it certainly seems to be true. While an ancient highwayman’s treasure is said to lie somewhere on the estate, a phantom horse that signals dire events and losses is hardly worth the promise of mythological gold. The good owners are going to have to close shop and leave the ranch to its formidable ghosts. Only Nancy doesn’t want to see such hospitable people ruined. She begins investigating, believing that the phantom is a slight of hand and the old lore of treasure might be attracting some unsavory, criminal interest. We know that Nancy will prevail – doesn’t our wily sleuth always out-wit her enemies? But what adventures will she see first; what dangers will she encounter? And how does a criminal ring go about summoning a ghost horse to do their bidding? 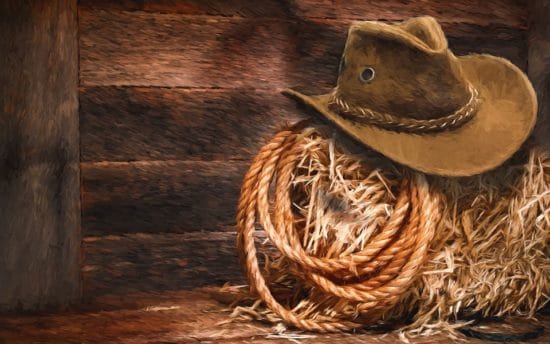 Most people of the last generation or two have read the Flashlight version of Nancy Drew which is the sanitized, 1950s version of Nancy that took the original gun-toting 20s girl and made her a little more “feminine.” I’ve heard about the original version – even have a few – but haven’t read them yet. Nostalgia demands that I go back to the versions of my youth and my mom’s youth. I can’t really tell you what version is better, only that two exist and the 50s version is the one you’ll get from the stores, both online and otherwise.

The atmosphere in The Secret of Shadow Ranch is distinctly cozy and flavored with an intriguing western feel. There are horse rides up steep paths and winding mountains, ancient, discarded Indian dwellings, desert like expanses where a broken down car and lack of water spells disaster, and the usual be-hatted cowboys. The cowboys of Shadow Ranch, however, aren’t the gentlemen they appear and very early on Nancy suspects the milling crowd of helpers.

On my second read, around twenty years after my first indulgence, I admit to difficulty keeping all the ranch hands and cowboy helpers separate. Still, the adventure was endearing for the atmosphere, the wit of our brave gumshoe, and the complexity of the mystery, especially for pre-teen/children’s literature. There are no ghosts that go bump in the night but in true Scooby-Doo fashion, man is the enemy, his schemes multilayered. In the end, good always wins (after a thorough scare and near capture/death experience) and Nancy delivers the well intentioned ranch owners and their family while also rescuing a resident artist and reuniting him with his daughter. Before we get there, though, there are jewels, legends, rockslides, horses, cowboys, escapes, abandoned towns, and more. Everything needed to addict and entrance a young reader, introducing the world of mystery and the moral that intelligence and patience always wins over haste and greed. Onward now to The Secret of Red Gate Farm!