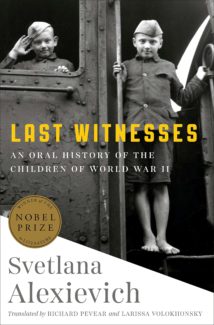 It took me months to read this book.  Not just a few, but many.  It may seem strange, but I really can’t think of a way to recommend the book more strongly.  There are exactly 101 stories in Last Witnesses.  Almost every one of them is so gut-wrenchingly powerful that you really shouldn’t plan on reading more than two in sitting.  I found myself avoiding the book at times, knowing that each encounter would be so profoundly upsetting, maybe more than I could handle.

Based on interviews with adults who were children during World War II, journalist and oral historian Svetlana Alexievich has created a remarkable account of some of the most horrible events of the war.   Long after the war was over, she meticulously collected the childhood memories of many dozens of survivors of Nazi Germany’s devastating destruction of the Byelorussian SSR – now the independent country of Belarus.  An architect with memories of life as a four year-old during the war, a mechanic who recounts the struggle to survive as an 11 year-old, and so it goes, each individual contributing to an astounding collective memory repository.  Despite the harsh realism of each account, the author manages to find the child-like voice in each of her subjects, frequently contrasting the horrors of war with the trivial concerns of childhood, like dolls, clothing and toys. 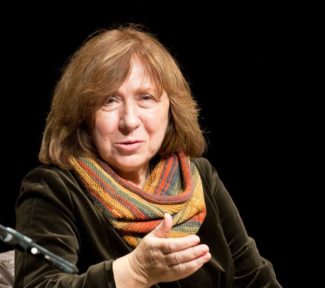 First published in Russian in 1985, the book has only recently been translated into English, no doubt inspired by Alexievich’s receipt of the Nobel Prize for Literature in 2015.  At the time this honor was bestowed, her body of work was acclaimed as “a monument to suffering and courage in our time”.  In this, and other books, she captures the voice of countless forgotten or overlooked individuals, creating a style of oral history that is uniquely powerful and intensely moving.

Fiction, even when it seeks to capture real life events, offers a shelter.  The very fact that the story is imagined provides a layer of protection for the reader, placing some distance between the act of reading and the subject.  In a similar way, oral history or memoir, when presented by adults, is often tempered by the passage of time or even an unconscious desire on the part of the presenter to diminish the horror of events, so as to not overly distress the audience.  What Alexievich manages to do is to peel away these protective layers, presenting often brutal eye-witness testimony as if it is being delivered directly from the mouths of children.  There are no filters here and it makes for some of the most devastating writing I’ve ever encountered.

Last Witnesses affected me so profoundly; I can’t really recommend it enough.    I hope I’ve prepared you for what you face if you’re brave enough to tackle this book.   I also hope I haven’t scared you away.  It’s not easy reading.  It’s not escapist reading.  But it’s incredibly important if you value the act of reading for its ability to place you in someone else’s shoes.   Highly recommended.