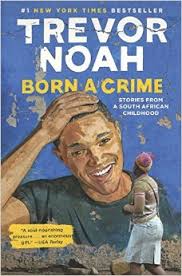 We all have them; childhood stories are a dime a dozen.  Usually, only the most indulgent of family or friends are likely to be willing to put up with any sort of recounting of them.  But that’s not true for stand-up comic and Daily Show host Trevor Noah.  His upbringing during the final days of South African apartheid was anything but typical.  Born of mixed race, he didn’t really fit in anywhere.  Neither black (like his mother), nor white (like his father), nor colored (like his skin suggested) he was a misfit from the day he was born.  He tells his unique story with humor and poignancy in Born a Crime.  As celebrity memoirs go, it’s the bomb.

Whether he’s recounting misadventures with his favorite dog Fufi, frequent hilarious run-ins with the authorities, his unfortunate romantic escapades or his wild life as a teenage digital music pirate, Noah’s childhood stories are frequently hilarious.  Frequently exhibiting his stand-up comedy chops, his storytelling skills are put to good use.

But it’s not all just fun and games, as he also tells of many of the struggles growing up.  As the living product of a criminal act, young Trevor was always in danger of being taken away from his mother.   Before he was even old enough to understand what was going on, he and his mother were constantly on the lookout, making sure that the identity of his Swiss father was not discovered.   This harsh reality isolated the young boy.  But frequently, Noah was able to take advantage of his role as an outcast, learning to get along with people of diverse backgrounds, becoming fluent in numerous languages and developing a resourcefulness that appears to have served him well as an adult.  He frequently pauses during the book to share devastating observations about current events that are undeniably more powerful given his unique life story.

While his many adventures are really quite riveting, the real hero of the book is undoubtedly Noah’s incredible mother.  From frequent arguments about Jesus to battles with Noah’s alcoholic step-father, the unbreakable mother-son bond that develops is truly profound.  The narrative of her formidable struggles against both an insanely racist social system and a remarkably mischievous little boy are consistently inspiring.

In the end, Born a Crime is a thoroughly entertaining memoir about the craziest celebrity childhood I’ve ever heard of.  At the same time – and this is what makes it extraordinary – it’s also an incredibly powerful tribute to a remarkable woman.  Throw in an insider’s accounting of the dismantling of South African apartheid and you’ve got a really great book on your hands.

Check out Dave’s reviews of other celebrity memoirs:  The Bassoon King (Rainn Wilson)   /   A Life In Parts (Bryan Cranston)   /   So, Anyway (John Cleese)