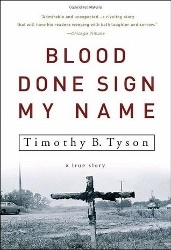 He was just ten years old.  It was 1970 in Oxford, North Carolina and Tim Tyson was just an unremarkable white boy when Henry Morrow, an equally unremarkable black man, was shot and killed by a trio of remarkably violent white men.  The murder would inflame this small town and would go on to transform Mr. Tyson’s life.  He tells his remarkable story in Blood Done Sign My Name, shedding much light on why America’s original sin continues to befoul the lives of people in small towns and large cities across the land.

It was the middle of rural tobacco country and despite court and executive orders to promote racial integration over the preceding two decades, the leaders of Oxford and countless other communities like it hadn’t quite gotten around to it yet.  Oftentimes, city officials would opt to simply close places like pubic parks, rather than allow blacks and whites to use the same facilities.  Despite great strides and civil rights achievements across the country, separate and unequal was still the harsh reality in places like Oxford. 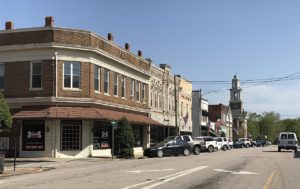 It was in this environment that the author grew up.  Raised in a relatively liberal family that supported racial equality, Tyson writes lovingly about his father – a local minster – who worked tirelessly to try and bridge the gap between the black and white communities, often risking his life and his career to do so.

Inspired by his courageous father and the events of 1970, Tyson would go on to earn a doctorate in Afro-American studies and much of his dissertation would focus on the murder of Henry Morrow, uncovering secrets that had remained hidden for over a decade.  That research supports much of this story as well, but this book is much more than a dry historical document.  It is a passionate dissection of the history that still haunted the nation when it was published in 2004 and continues to do so – oftentimes even more appallingly – to this day.

A white mob assembles in Wilmington, NC in 1898.

Violence is omnipresent.  It’s Tyson’s emphasis on this reality that makes the book extraordinary.  He goes to great lengths to disassemble the myth that Martin Luther King and pacifism somehow won the day.  Over and over, the threat – and actual perpetration – of violence is what finally convinced white citizens to find a way to grudgingly accept equality for black people.  And as anyone who’s paying attention can tell you, we’re still a long way from the finish line.

Tyson also illustrates how black history and white history aren’t the same thing.  If you’re a white man like me, you probably don’t know much about the massacres that feature so prominently in the history of African Americans.  Destrehan Plantation in 1811.  Wilmington, North Carolina in 1898.  Greensboro, North Carolina in 1979.  The list is formidable and each of these atrocities is central to the experience of black people in this country.  Historian Tyson touches on them briefly, leaving me to surreptitiously scramble over to Wikipedia to try and stanch my ignorance.

In the end, Blood Done Sign My Name is an incredibly rich act of catharsis from a remarkably gifted historian and writer.  Often angry, frequently passionate, he makes no claims other than to tell the story of one individual, pulling very few punches in the process.   Highly recommended.