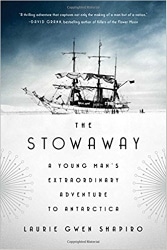 History writing via serendipity.  Sometimes the results are fun and intriguing.  A few years ago, while researching an unrelated topic, journalist Laurie Gwen Shapiro came across the story of a young man named Billy Gawronski.  A minor celebrity in the late 1920s, for a brief time he was internationally famous as America’s youngest Antarctic explorer.  She tells his remarkable true story in The Stowaway. 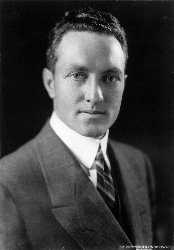 The son of Polish immigrants, Billy grew up in New York City, seemingly destined to inherit his father’s fine upholstery business.  But he had much bigger ideas in mind.  In 1928, Commander Richard Byrd was planning America’s first major Antarctic expedition and the impulsive seventeen year-old – an avid Byrd fan – was determined to find on way on board.  After multiple stowaway attempts, the commander eventually agreed to let the tenacious young man work on one of his support vessels.  As a result, Gawronski eventually made it to the Antarctic continent and played a significant role in the success of Byrd’s mission.

At the time, stowing away on sailing ships was a bit of a fad as there was often competition amongst various perpetrators to try and remain on board. Most stowaways were returned to shore when they were discovered, but Billy’s persistence paid off and he eventually turned his experience into a lifelong career.

Shapiro does a great job unearthing this unique story, as Gawronski – and Byrd for that matter – have pretty much fallen off the US history map, washed away by the subsequent Great Depression.  In addition, she skillfully weaves Billy’s story into the context of the Roaring Twenties, effectively capturing the unbridled optimism of the time.

By uncovering a trove of dusty American history, Shapiro has crafted an entertaining and engaging read about a distinctively American hero.  Filled with thrilling adventure and long forgotten history, The Stowaway is a success from the busy streets of New York City to the icy tunnels of Little America.  Highly recommended.

Other book reviews about Antarctic adventure:  The Last Viking   /   Alone on the Ice   /   Swimming to Antarctica