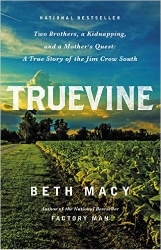 It’s a biographical excursion into the unknown.  They were two of most famous entertainers of their time, yet almost nothing is known about them.  George and Willie Muse were the brothers’ given names, but on stage their monikers varied over time.  Known as the “Ambassadors from Mars”, or the “Sheep-Headed Cannibals from Ecuador” and finally just “Eko and Iko”, they traveled the world as circus freaks, amazing audiences for decades.  In a feat of truly bold biography, journalist Beth Macy tells their story in Truevine.

But before they were celebrities, they were little boys, working members of a sharecropping family on a tobacco farm in rural Virginia.  It was in 1899 when George and Willie, nine and six years-old respectively, disappeared without a trace.  Their mother had heard stories of white men traveling the countryside, kidnapping black children, so she feared for her sons.  She had reason to fear, as her sons were unusual in the extreme.  They were both afflicted with oculocutaneous albinism.   Despite their African heritage, their skin was pure white and their eyes continuously twitched giving them a goofy appearance.    Combine that with the wild and wooly dreadlocks they sported and the unscrupulous sideshow men of the time recognized a valuable commodity when they saw one. 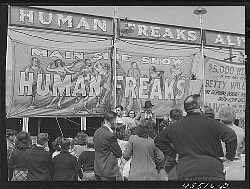 Told by their captors that their mother had died, the boys were displayed at circus sideshows across the country, hanging out with giants, midgets, bearded ladies and all the other so-called freaks.  In reality, their mother Harriet – still alive and well – had been searching, hoping she would find them whenever circuses came near Roanoke.  It’s hard to imagine the boys’ existence:  motherless, uneducated, almost blind, always on the move, with no one but each other to provide comfort.  But somehow, despite the abusive conditions, they persevered.  Their mother was equally stubborn and almost three decades after her boys had been abducted she found them and proceeded to take their “owners” at Ringling Brothers to court.  The idea of a poor black woman fearlessly standing up to one of the biggest corporate entertainers of the time – in Virginia, no less – is a true testament to the power of motherhood.

Despite its epic qualities – villains, heroes, injustice, retribution – the story most certainly does not tell itself.  Struggling for twenty-five years, author Macy had to overcome a formidable amount of resistance from the brothers’ cautious and defensive family members.  It wasn’t until recently that their grandniece – the primary caretaker of Willie until his death in 2001 – allowed for the story to be told.  The brothers left behind very little information about their lives and their family members weren’t very interested in talking to some nosy white woman.  They had suffered enough.  But by exhibiting a stubborn streak of her own, the author somehow manages to piece together a story, visiting museums and odd-ball collectors all over the country and continuing to gently pressure the protective grandniece.

The result is a touching biography of two remarkable individuals as well as a history of the freak show in the days before radio.  Typically affiliated with the massive traveling circuses, these sideshows were incredibly popular and lucrative across the United States and in Europe, although the actual performers often received very little remuneration.   Given the paucity of information available, the author is often left basing her conjectures on the brothers’ posture in the few pictures that remain.  Despite these kinds of limitations, she does an astonishing job of describing what life was as a world-famous freak.

An illuminating and often disturbing look at the cruel entertainment world of a time gone by, Truevine is a fitting and thoughtful tribute to two particularly notable victims of humanity’s seemingly inexhaustible yen for the unusual.  While we may have grown (slightly) more enlightened and compassionate over the decades, sometimes I still wonder.  Clearly, true civilization continues to be a work in progress and eye-opening history like this can play an important role in the process.