YA Trilogy Thrills: Girl of Fire and Thorns

YA Trilogy Thrills: Girl of Fire and Thorns

Isn’t it wonderful when you stumble upon a really exciting book and realize the entire series is already complete, so you can devour them all as fast as you can read, without the painful months of waiting for each new installment? That’s what I’ve been doing with the Girl of Fire and Thorns trilogy, by Rae Carson, which wrapped up in 2013. Because they really are one story in three volumes, I’ve chosen to review them all together here, so if you haven’t finished (or started) this magical, girl-empowering fantasy trilogy yet, stay vigilant for possible spoilers! 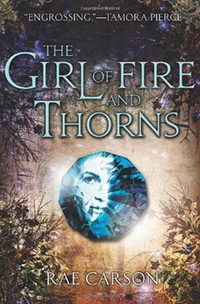 The Girl of Fire and Thorns

At 16, Princess Elisa of Oroville is a disappointment to her people. She is the bearer of the Godstone, a shimmering jewel tucked in her belly button that marks her as God’s chosen, selected once in every century for some sacred duty (although not all fulfill their duties, and most die young). She is also overweight, painfully shy, and riddled with self-doubt, and her status at court reflects this. When Elisa is betrothed to the handsome King Alejandro, of the neighboring kingdom of Joya d’Arena, she is crestfallen at the disappointing realities of political marriage among royals. But her sacred duty becomes clearer when the Invierne army, led by powerful sorcerors, attacks Elisa’s new kingdom. Discovering a book of prophecies about the Godstone bearers, Elisa begins to believe that the magic of the Godstone could be wielded against the evil sorcery of the Invierne animagi — and that her destiny is to figure out how to do it.

The first installment in the trilogy hits the ground running, and while there’s a lot of information to process, it won’t keep you from enjoying the character development and quick-moving plot. The setting has a strong flavor of Renaissance-era Spain, from the prevailing religion to the political system to the powerful queens reigning in their own right. The blurred lines blending science, medicine, magic, and religion feel true to a world in which proof of both God and magic exists. 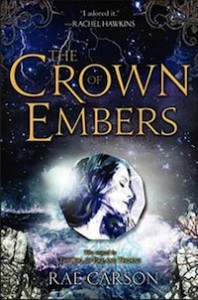 The Crown of Embers

After successfully repelling the Invierne invasion, and after the death of King Alejandro, Elisa is now the ruling queen of Joya d’Arena. But she’s been distracted and weak, and her power-hungry advisors are pressing her to either marry for the kingdom’s stability, or demote herself to co-regent for her royal heir, the child Prince Rosario. The city is still burning in the aftermath of war when new Invierne sorcerors show up, threatening the queen’s life; they’re desperate to learn the secrets of her living Godstone and turn it to their advantage. With a few trusted friends — and one very reluctant Invierne tagalong — Queen Elisa hastily embarks on a quest to learn the truth of an ancient prophecy that she believes to be about her sacred task. To complicate matters further, Elisa belatedly realizes that she is in love with someone she can’t have; will she sacrifice her personal happiness and marry for the good of the realm?
In this second volume, life is as perilous as ever for Elisa, but the stakes have been raised as she comes closer to unlocking the power of her Godstone. Caution battles with trust as Elisa untangles the political schemes around her, and begins to rely on her own intuition and judgment. The well-drawn characters are rarely pure good or evil, and Elisa must learn to treat her subjects and her enemies as a ruler. As the romantic subplot progresses, Elisa’s naivete and obliviousness slowly gives way to a more adult understanding of attraction, love, and desire. Her romantic dithering takes up more of the book than it needs to and eventually gets annoying, but that seems to be the sort of stuff that YA readers eat up. 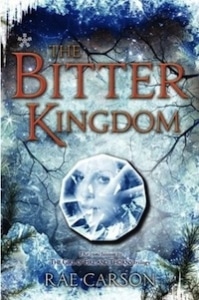 In the trilogy’s conclusion, Elisa has come a long way: from timid, self-doubting princess to powerful magic-user and ruthless queen. But her kingdom is still under threat by the Invierne animagi, who seek control the planet’s natural wellsprings of magical power — which they could use to rule the world. The Joyan political battles continue, but this last installment takes Elisa far from the palace in search of a solution for lasting peace… and the final revelation about her Godstone-given holy quest.

The science-fiction elements become a little stronger as the story wraps up, with some tantalizing hints about the origins of the Inviernos as well as Elisa’s people, and the reasons behind their ancient hatred of each other. Some questions are never fully answered, but this feels acceptable in a series that’s about the divide between knowledge and faith, spirituality and destiny vs. free will and self-actualization. Of course, romance is still a theme, but thankfully it’s secondary to Elisa’s developing confidence in her own abilities and strength as a leader, which makes it an inspiring story for younger female readers struggling with their own self-esteem issues.