2014 has been a banner year for fictional apocalypses. Before you dismiss it as a herd of dystopian YA romances, take note: this year’s offerings include literary fiction, time-traveling fantasy, and blood-soaked horror. These authors use apocalyptic disasters as metaphors for everything from class war to what it means (biologically and spiritually) to be human. If you love a good end-of-the-world adventure, take a look at the biggest apocalypse titles of 2014. 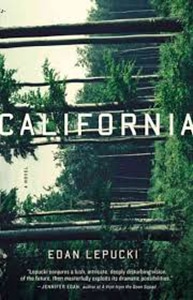 California
You’ve probably heard of California because of the now-famous “Stephen Colbert bump.” Author Sherman Alexie named Edan Lepucki as an example of a writer who was being unfairly punished by Amazon’s war against the Hachette publishing house, and Colbert (whose books are published by Hachette) challenged viewers to buy California from indie bookseller Powell’s as a fuck-you to Amazon, which they promptly did, in droves. But aside from that kerfuffle, is the book itself any good? It’s set in a post-apocalyptic world, where young married couple Cal and Frida have fled to the woods outside Los Angeles to live in an abandoned shack. They get by with occasional help from a neighboring family and a traveling peddler, but they’re all too aware of how marginal their existence is. Cal wants to avoid people and fend for themselves, but Frida hears rumors of “Communities,” independent city-states where the wealthy still enjoy civilization. This bleak parable of class war and the 1% has an interesting premise, but the action lags, and it relies too heavily on extremely unlikely coincidences to connect characters.
Recommended if you liked: The Handmaid’s Tale 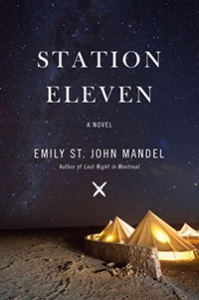 Station Eleven
Another high-profile phenomenon, Station Eleven has been shortlisted for the 2014 National Book Awards. But despite the setting, it’s really not science fiction at all. The action moves back and forth in time, alternating between the first weeks of a terrifying pandemic, and life in Year 20, when most young people don’t remember a pre-plague world. The story relies on a device wherein most of the main characters, past and present, have some connection to a George-Clooney-esque, much-married, aging A-list actor. Although that’s statistically improbable (to say the least), it works here, as we slowly tease out the threads connecting past and present, and how trauma and survival affect our identities and roles. The dreamy pace and evocative writing makes this book hard to put down, and a uniquely optimistic addition to the apocalypse-fic genre.
Recommended if you liked:A Tale for the Time Being 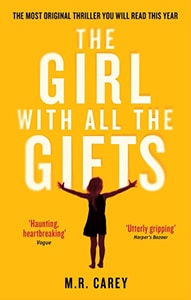 The Girl with All the Gifts
20-ish years after a pandemic destroyed most of the human population, the last remnants of civilization hunker down for survival inside well-defended military bases. In one such base, a curious and intelligent little girl named Melanie — part of a small group of very special children — lives alone in a prison cell under armed guard, attends “school” every day while strapped into a chair, and gets fed once a week. These children may hold the key to humanity’s future… if we can figure out the answers in time. The spooky setting gets a little potboilery during the second act, when it evolves into a more typical post-apocalyptic-quest tale, but the ending is satisfying and original. Buckle up for lots of gory death scenes and violence.
Recommended if you liked: The Passage 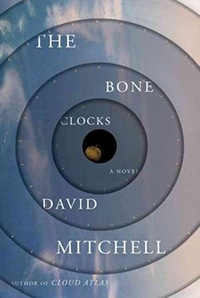 The Bone Clocks
If you appreciate David Mitchell’s wildly ambitious, elaborately structured, millennia-sweeping epic stories, you’ll enjoy his latest offering, The Bone Clocks. Like Cloud Atlas, this novel is divided into six connected sections that move forward in time from 1980s England to a dystopian future. 15-year-old Holly Sykes has always been psychically attuned to supernatural events, like the voices of the “radio people” she hears in her head. But when she runs away from home, Holly becomes vulnerable prey in a war between two groups of dangerous, ancient mystical beings. I’m still waiting to read this one myself, since everyone in Seattle currently has this on hold at the library, but I can’t wait to get my hands on it.
Recommended if you liked: The Bees 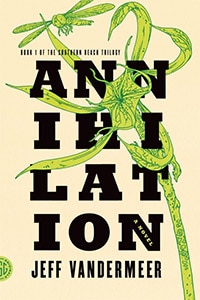 The Southern Reach Trilogy
This unusual trilogy made a splash because all three books were published a few months apart in 2014 (the ebooks were published simultaneously). In Annihilation, the first book, we follow a four-woman expedition — an anthropologist, a surveyor, a psychologist, and the narrator, a biologist — into Area X, a coastal area cut off from civilization because of the terrifying, inexplicable nightmare world across its invisible border. In Authority, a new director joins the Southern Reach program that oversees Area X, tasked with investigating the disappearance of the previous director and interrogating a survivor of the last expedition team. Is his sanity slowly unraveling, or is he simply a reflection of the disintegrating border between Area X and our world? In Acceptance, one final team crosses the border to try to solve the mysteries of Area X… unless they’re already too late. The action can be slow in these books, but the real thrill is in the creeping, hair-raising sense of incomprehensible dread that Jeff Vandermeer is so skilled at evoking. Annihilation works well on its own, but we bet you won’t want to stop there.
Recommended if you liked: Oryx and Crake 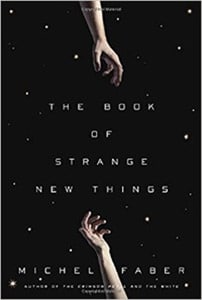 The Book of Strange New Things
Michel Faber has been away for a while since writing the astonishing Crimson Petal and the White, and his new offering promises to be an equally transporting saga — this time to the future. On a faraway planet named Oasis, a powerful corporation called USIC has established a colony of scientists working to make the planet habitable. Peter Leigh is sent to Oasis to be a missionary to the decidedly non-human natives, who refer to the Bible as “the book of strange new things.” Unsurprisingly, the interplanetary distance puts a strain on Peter’s marriage to Beatrice, who sends communications full of unsettling details about natural disasters, toppling governments, and other ominous developments back on Earth. Peter becomes increasingly distracted by the excitement of tending to his new flock, and as his missionary zeal grows, his wife’s once-strong religious faith wears thin. While not exactly Christian sci-fi (for one thing, it includes lots of profanity, violence, and sex scenes), it explores issues of religion and faith while pondering what it means to be human and how to be good in an indifferent universe.
Recommended if you liked: The Amber Spyglass