Seduction of Miriam Cross, The 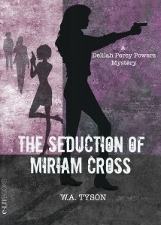 It can be hard, in today’s literary world, to put together a group of female sleuths and keep them from feeling like they’re in a cozy mystery.  Hard, but definitely not impossible, since W.A. Tyson manages to do so quite nicely in her series starter The Seduction of Miriam Cross.

The Seduction of Miriam Cross begins with a murderous prologue, in which we get a glimpse of the crime that our heroines will investigate.   We flip directly from there into the world of Delilah Percy Powers.  Delilah is a rancher’s daughter turned private detective.   She doesn’t get along well with her mother or step-father and has tried mightily to distance herself from their influence since the death of her father when she was young.  As head of her own firm she has hired an eclectic group of women to help her with her investigations.  We have Margot, the former nun; Barb, the no-nonsense mom; and Natasha, the young, very tough ex-stripper.  None works full time for Delilah and each has a complicated life of her own to work around.

Together they take on typical PI cases – until this time.  A former client who they rescued from an abusive relationship needs them again.  But this time she wants them to investigate a murder, something far outside their usual wheelhouse.  The victim was Miriam Cross, the client’s aunt and a well-known author whose gruesome murder didn’t even crack the local papers.  As Delilah and her crew start digging they discover that Ms. Cross had a whole lot more going on in her life than her rather austere exterior led others to believe.

There are a lot of good things to be found in this book.  Author Tyson gives us an interesting protagonist with both personal and professional issues that leave room for many future installments in the series, a group of very interesting peripheral characters and a complex, well plotted and gritty mystery.  There is nothing cozy happening here – no lighthearted banter or quirky characters that are supposed to be funny.  Assuming it’s setting up to be a series, it’s going to be straight up crime/thriller.  That’s a good thing.

My only real quibble is the inclusion of a mandatory feeling male character that seems to exist only to ignite Delilah’s dormant sex life.  His few contributions to the plot could easily have been covered by the other characters.  I can accept him as an eventual addition to the cast, but he feels premature in this initial installment.

The Seduction of Miriam Cross is well written, flows smoothly and really doesn’t have spots where the pace lags.  Tyson keeps the twists coming as Miriam’s secrets are uncovered and blends the introduction of her cast of characters well with a strong, gritty crime mystery.  4 out of 5 stars and a recommendation for anyone interested in crime fiction for The Seduction of Miriam Cross.  I’ll be interested to see where this series goes –it most definitely has potential.