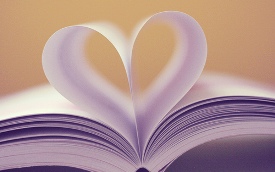 Love is in the air…

It’s February!  Certainly time for a few great romances to fill out your home library.  Instead of choosing classic romances for our top 6, we’ve decided on some more contemporary choices to sate your romantic (book) desires.   No bodice rippers (not that we have anything against those) or Jane Austen (not that we have anything against her, either) – instead we’ve chosen novels that will appeal to the romantic in everyone, from teenager to time traveler.  Even if Valentine’s Day isn’t on your radar, take a chance on fictional love and dig in.  You can find each of our choices on the carousel below (allll the way at the bottom), linking you directly to Amazon, where you can stock your shelves with goodies galore!

A Homemade Life: Stories and Recipes from My Kitchen Table

Seattle blogger Molly Wizenberg adapts her beloved foodie blog, Orangette, in this charmingly romantic memoir. After her father’s death, Molly finds herself unable to return to her former life as a grad student in Seattle. To get a fresh start, she travels to Paris, a city that’s full of happy childhood memories of her father. As she explores the markets, samples cheeses and pastry, and avoids working on her dissertation, Molly finally realizes that her true passion is cooking, and Orangette is born. Her blog quickly becomes popular, especially with one handsome reader, and their correspondence grows into a long-distance romance (spoiler: they got married, had a baby, and now own Delancey, a pizza restaurant here in Seattle!). Each chapter is capped with one of Molly’s own family recipes that ties into her stories, and they all look amazingly delicious and achievable. I recommend baking a loaf of Banana Bread with Chocolate Chips and Candied Ginger before you start, so you’ll have something to snack on while you read.

How can you be seen — and loved — for who you really are when you’re a different person each day? Most teens probably feel this way, but in David Levithan’s novel Every Day, it’s literally true: the 16-year-old protagonist, A (who 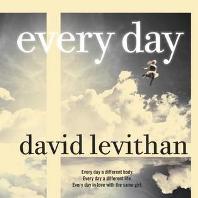 identifies as neither male nor female), wakes up in a different body every morning. A’s host body might be male or female, or any ethnicity, but seems to roughly correspond to A’s true age (as far as it can be known). A has a moral code and tries to respect the host’s life and body as much as possible; the host will wake up the next day with no memory of A’s visit, so clearly A could wreak serious havoc with no real consequences. But one day, A inhabits the body of Justin, a stoner jerk with a girlfriend he doesn’t deserve: Rhiannon. One magical day with Rhiannon is enough to make A fall headlong in love, but how can there be any lasting connection between them when A can’t offer any stability or permanence? The body-switching premise is a great device to help teen readers explore thorny issues of identity, love, and sexuality, but the romantic plot and sympathetic characters will also appeal to any reader who simply wants to swoon over a good love story.

In a truly stunning debut novel, author Audrey Niffenegger introduces us to Henry DeTamble – librarian and time traveler.  Thanks to a genetic disorder, Henry hops through time against his will.  He generally sticks to his own his own timeline rather than traveling to the distant past or future and goes to familiar places.  Sadly, he always arrives naked so learns a great number of basic survival skills.  But the novel is less about the construct of this particular form of time travel than it is about Henry’s relationship with his wife, Clare.  Told in the first person, sometimes we hear from Henry, sometimes from Clare.  After their first meeting in Henry’s lifetime – while in their twenties – he begins to travel to her past, creating an elaborate and remarkably elegant weaving of past, present and future for both main characters.  It’s rare that a love story can survive such manipulation, but Niffenegger manages to bring both parties to life, leading the reader into acceptance of both her premise and her characters.  I rarely cry when I read fiction – The Time Traveler’s Wife left me teary and sniffling.

Every marriage has its problems, but most of them aren’t complicated by the wife/mother going off to war.  Author

Kristin Hannah explores the complicated dynamic between a woman whose life was shaped by the military and her husband, who has always viewed her service with displeasure.  Jolene is a National Guard pilot, having served in the Army from a young age.  She came from a neglectful and dysfunctional home; the military gave her structure and roots.  Michael, her defense attorney husband, is not fond of his wife’s service, and recently the two have grown apart as both partners and parents to their two daughters.  When Jolene is unexpectedly deployed to Iraq both husband and wife have to deal with the reality of their choices and how they have affected the family.  No matter how you feel about military service, you’re bound to be moved by the struggle of these two strong people to rescue their relationship under extreme duress.  Jolene’s experiences in Iraq are bleak and terrifying and Michael’s struggles as a single parent make him seem like a whiny baby in comparison.  But as we get to know them both, we see that neither is to blame – and both are – for their relationship predicaments.  Home Front presents a complex relationship made even more so by a modern world seemingly set on destroying this one small family.

The Journal of Best Practices

I’m not a big fan of typical romance, so it’s high praise when I say that The Journal of Best Practices is one of the most romantic — and funny — real-life love stories I’ve read in years. After being diagnosed with Asperger’s syndrome and belatedly realizing how it has damaged his failing marriage, David Finch begins obsessively writing notes to himself about how to be a good husband: “the journal of best practices.” For someone who doesn’t get empathy, listening, or social cues, these are deep and treacherous waters. Along the way, Finch comes to understand how his parents’ marriage influenced his outdated assumptions about gender roles: the husband as breadwinner, the wife as stay-at-home mom. Eventually, he sees that he was basically one more child his wife had to care for: demanding, selfish, and prone to screaming tantrums if he didn’t get his way, not a supportive, equal partner helping the family to work as a team. While this book is a fascinating glimpse into the minds of people with Asperger’s, it’s equally compelling as a portrait of a modern marriage, with overworked spouses struggling to balance careers and children and social relationships while keeping their own connection alive. Just about anyone who’s been in a relationship will appreciate Finch’s rueful humor, horror stories, and hard-won wisdom, all told in a funny and genuine voice.

What better time to cuddle up with a cozy than February?  Especially when that cozy has a sweet little romance built in to

keep things warm – but not steamy.  Maids of Misfortune stars, as our main character, a lovely young woman by the name of Annie Fuller.  Annie lives in the San Francisco of the late 19th century and has the dubious distinction of being a self-supporting woman following the death of her no-good husband.  She runs a respectable boarding house but moonlights as a financial planning psychic.  I know, it sounds ridiculous – and it is – but it also manages to work.  Annie is a good woman, coming to some uncomfortable realizations about the class system of her era, solving the mysterious death of one of her psychic’s clients and dancing around a budding relationship with a very handsome young lawyer.  Locke’s secondary characters defy cozy genre expectations by not being stupid, rude of overly eccentric and thus become one of the main reasons the book is such a satisfying read.  We can like all of these people, enjoy our little foray into Victoriana and not constantly wonder how our heroine possibly puts up with the insufferable oafs with which she has surrounded herself.  Score one for ignoring genre convention!  A good choice if you’re looking for something light, fast and relatively chaste, but with plenty of warm, fuzzy, new romance feelings.

Not a fan of Valentine’s Day?  Check out our equally fabulous Anti-Valentine’s Book List for some grinchy suggestions.

If you’s like to add any of these great titles to your library, click on one of the pictures below to be magically whisked to the correct Amazon listing!