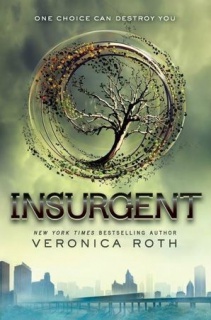 Let’s just pick up with the question everyone wants to know:

Is Insurgent as good as Divergent?

Being the annoying person that I am, I’m not going to give you an easy answer, because the truth is that yes it is.  And no, it isn’t.  We really need to look at it for what it is – the second installment of a trilogy.  So if you haven’t read Divergent, stop reading this review and go, read the book.  You’ll get nothing from Insurgent if you haven’t read its predecessor.

Okay, now that you’ve done that, I can tell you that Insurgent picks up immediately after the events in Divergent.  As in the minute after.  Tris and Tobias (formerly known as Four) are on a train headed away from Dauntless headquarters after shutting down the Erudite devised simulation that left most of the leaders of Abnegation dead at the hands of mind controlled Dauntless soldiers.  They have with them, to their utter dismay, Tobias’s abusive father Marcus (one of the only remaining Abnegation leaders) and the evil and repugnant Peter.  On a happier note, they also have Caleb, Tris’s brother who chose to join the Erudite after being raised Abnegation.  That loyalty has been severely tested by the murderous actions of the Erudite leader.  There is precious little trust among this group.

They are headed to Amity headquarters, to seek refuge and assistance.  Tris has a bullet wound in her shoulder and none of them know what happened to the Dauntless or the remaining Abnegation after Tobias ended the attack simulation.  What they do know is that they, and their carefully controlled social structure, are very close to crumbling into nothing.

Insurgent is the story of what happens after the unthinkable.  After one faction turns on another, after carefully regulated and ritualized social strictures are rendered moot and unenforceable, after irretrievable loss on all sides.  Loyalties are tested again and again – sometimes the tests are passed, sometimes failed – and Tris and Tobias look for truth, justice and revenge (not always in that order).  Why did the leader of Erudite resort to such brutality?  Why are the Divergent deemed so dangerous?  How will people so unaccustomed to freedom adjust to chaos and anarchy?

And, of course, how will the romance between Tris and Tobias progress?

So there’s a lot going on – with no, and I mean zero, attempt to make this a standalone book.  We’re not bogged down with explanations, the action takes off from page one.  After that, we start to vacillate.  A lot of bad things happened in Divergent, things to which a girl raised in Abnegation is entirely unaccustomed.  In Insurgent, Tris must own her actions and deal with the resulting guilt and grief.  Truthfully, there’s a little too much of this moody brooding.  It serves its purpose, in the further development of Tris’s character, as well as that of those surrounding her as she deals with her many crises of conscience, but it also gets a little boring as time goes on.

What are far more interesting are the developments in plot as well as world building.  We still have a lot of questions about how this society functions – as well as how it will survive under duress.  We also don’t know what happened to the old Chicago, how long ago, or what lies beyond the walls of this very controlled environment.  Author Veronica Roth creates a world that’s both dystopian and utopian,  where there is a rotting hull of the former world, cradling this supposedly new and improved and (until now) peaceful world.  In between Tris’s bouts of sobbing and loin aching for Tobias, we start to get some answers to our questions – which leads to more questions, just like a good middle trilogy novel should do.

And what about that loin aching between Tris and Tobias?  Now that the Dauntless have imploded will they feel free to explore their feelings?  Don’t be silly – they’re in the middle of a war.  And in this war these two teenagers are vitally important, as they serve as the two most potent examples of the Divergent.  So there isn’t as much longing and groping, but there is a lot of stress and distrust.  Their relationship will be sorely tested, as will their feelings and beliefs.  Don’t worry, teen audience, there’s still plenty of gooey gaze locking, but not as much as in Divergent.   For that, the adult audience can breathe a sigh of relief.

Insurgent is a more than adequate middle trilogy book – it has loads of action, really interesting world building and plot advancement and decent character development.  I wanted to smack the Abnegation out of Tris on occasion, but she will be very, very relatable to the teen audience.   4 out of 5 stars for Insurgent, with eager anticipation for the last installment, Allegiant.