Fall of Our Secrets, The 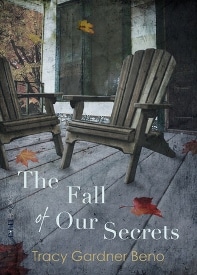 Does everyone have one childhood friend that they will always wonder about? What became of them, why you lost touch, are they still the way you remember? Laura Miller does – and her name is Nicole Murdock. A coincidental meeting between the long lost friends sets in motion a string of events that changes both their lives in a matter of months in The Fall of Our Secrets by Tracy Gardner Beno.

The Fall of Our Secrets begins with Laura and Nicole meeting coincidentally at a hospital in Texas. Laura is attending a conference for her job as an evidence technician in Michigan and Nicole is a volunteer coordinator at the facility. The two haven’t seen each other since they were fifteen years old and Nicole’s family disappeared in the middle of the night, leaving her friend stunned and worried, fearing the worst. Nicole’s volatile father had always been a source of pain and stress and after some time, Laura stopped hoping she would ever see her friend again.

That chance meeting sets off memories for the now married Nicole as she reconnects with her friend and her life as a child. We learn about her abusive home life, her disappearance and the holes in her memory. We also find out that Nicole and her brothers did not escape their past unscathed – there is a lot of pain still being borne by the siblings.

We also have the story of Laura, who is overjoyed at seeing her long lost friend and eagerly picks up their friendship where they left off. Laura has a teenage son, is a single parent and has a lackluster boyfriend. As she delves into the mysteries of Nicole’s past, she deals with her own home and love life.

The Fall of Our Secrets has some really nice elements. Nicole’s relationship with her brothers, a bond formed by surviving their horrible childhood, is sweet and feels real. Their issues also ring true; as such a traumatic upbringing seldom results in adulthood without wretched remnants of trying to overcome both physical and emotional pain at a tender age. I also thought the mystery of what happened to Nicole’s family that fateful night they disappeared from Laura’s life held quite a bit of promise.

Unfortunately, the execution is a little off, and it seems that Beno had a hard time deciding if her story was a true mystery. There is a lot of romance, silly romance, mixed in with the tragedy. Laura’s new boyfriend, Nicole’s inexplicably perfect husband – the attempts at steamy sex scenes and relationship pitfalls seem out of place and unnecessary.

I also had a hard time with the POV. Sometimes we’re in Nicole’s story and we were seeing things (in the third person) through her eyes. Other times we jump to Laura. It can be hard to keep track and I had to backtrack more than once to figure out whose world we were in. More of an issue at the beginning of the book, that one seems like a simple editorial blunder rather than a major flaw.

I neither hated nor loved The Fall of Our Secrets. It has good aspects like the basic mystery of Nicole’s life, and weak aspects like the failed romantic plotlines. It’s a very girly book, with handsome men always there to divert attention from the weightier topics. I have to admit that’s a type of style of which I am not overly fond and I ended up finding the book a little plodding after a while. 3 stars out of 5, with a guarded recommendation for those readers who like romance and a little sex with their tragedy and mystery.

My thanks to Candace at DJC Communications and e-Lit Books for sending me a review copy of The Fall of Our Secrets.