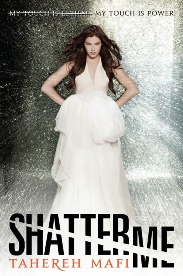 grabbing a post-apocalyptic setting and tacking on a more typical and cliched “teen book” is a lot easier than borrowing the more complex elements of The Hunger Games.  Shatter Me has a smattering of originality in places, leaving it many steps above sparkling vampires, but stumbles into too many trite potholes to be a worthy dystopian successor to Suzanne Collins’ tour de force trilogy.

Shatter Me begins with a girl locked in a cell, alone for almost a year.  Her thought patterns are scatter-shot and oddly focused after such a long period of isolation.  We learn that the world as we know it has ended, replaced by the human suffering, death, fear and tyranny that accompany a dying planet, destroyed by its inhabitants.  We also learn why the girl, Juliette, has been locked up – her touch is deadly.  Literally.  With her hands, her skin, she drains the life from those with whom she has direct physical contact.  She doesn’t mean harm, she is devastated when she hurts someone.  No one knows why she is how she is, but her parents gladly give her to the state to be imprisoned when given the opportunity.  She has been there for three years.

As we enter Juliette’s world we learn that she is going to get a roommate.  A boy, Adam, appears and she has no idea how to communicate with him, whether to trust him or why he has joined her in the asylum.  Again, her thoughts are in disarray, her story jumbled, her paranoia making her first person narrative frustrating and childish.  Soon enough Juliette, and we, will find out why Adam is there.  Also, there will be teen yearning.  Lots and lots and lots of teen yearning.

Sigh.  I like this premise.  A girl who cannot touch or be touched without inflicting great harm, locked away for years and suddenly confronted with a companion, as well as the offer of a different sort of life.  Her affliction has great value to those in charge of the new world order – how can she stay sane while being used as a weapon?  Can she really exist outside of her prison?

Unfortunately, the new government is too simple – just a military dictatorship without nuance or back story.  The leader of Juliette’s sector is nothing but a traditional obsessed psychopath.  The fight against tyranny amounts to one long chase scene punctuated by ludicrously described interludes of teen hormonal activity.  The romance takes up so much time that could be devoted to world building – so very disappointing in its sickly sweet excess.

Shatter Me reeks of the first book in a series.  It asks more questions than it answers.  Sometimes, when the scene is sufficiently interesting and adequately set, there is a deliciousness in anticipating a second installment.  Author Tahereh Mafi didn’t do that for me.  She wore me out with romantic conveniences, Juliette’s awkward and scattered narrative and her clingy neediness.  I don’t like this heroine enough to seek out a second litany of her confused yearning to find out what happens in her world.  A disappointing 2 out of 5 stars.