You’re Bumming Me Out, Preacher 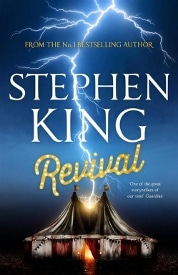 I’ve been reading Stephen King for a long time. So long that I feel like I can read through his characters what sort of life stage he might be in. I just finished Revival and this armchair psychologist is thinking Mr. King might be pondering his mortality. I wish he would stop. Revival isn’t a bad book, but I found it oddly depressing.

Now you might think that all horror is going to be depressing on some level – what with the murder and mayhem – and you’d be right. That’s the kind of depressing I expect, and look forward to, when I crack open a new King. But this is different.

Revival is the story of Jamie Morton, from the time he’s a wee school boy until well into his adulthood. Jamie lives in a small town in Maine, a town that’s just getting a new preacher. Charles Jacobs is a breath of fresh air, with his pretty young wife and toddler son and his overall enthusiasm for life and God and his new church. But it wouldn’t be King if there wasn’t a tragedy, and so there is – after which Charles Jacobs and Jamie Morton part ways, only to be reconnected by fate or circumstance time and again as the years pass.

As always, King writes fantastic characters – especially main characters – and Jamie is no different. We feel like we know him, like he’s someone familiar and normal caught up in events not meant for regular guys. His adolescent dabblings in the music business lead him through a series of trials and tribulations with true adulthood on the other side. He can’t get too comfortable, though, because he owes Charles Jacobs and Charles Jacobs intends on collecting on his debt. That’s when things get weird.

I have two problems with Revival and that’s the first of them. It takes far too long for things to get weird. The first half of the book has Jacobs dabbling with electricity as a hobby and Jamie fumbling his way through his life in a rather ordinary way. Sure, there are touches of the extraordinary, of tragedy, of self-destruction and of mystery, but nothing more than touches. By the time we get to the supernatural we’re so far into the book that it almost feels like an afterthought. The real story is just Jamie – living his life over the span of fifty-odd years.

My second problem is that fifty year span. As we meander through Jamie’s life, it’s as though we’re helplessly watching him lose touch with his family, his youth and his bearings, eventually becoming an aging ex-musician spending too much time looking back at his younger self. As he tells his story we can’t help but sense his wistfulness over the passing of time and the vanishing of his childhood, his vivid memories of those young days are those of a man no longer living for the future, but just riding it out, remembering the past in such excruciating detail that it isn’t a surprise when it bites him in the ass.

And that’s what ends up being depressing. Jamie and his long, slow plod toward old age – an old age that doesn’t feel like (Charles Jacobs and everything he brings with him aside) something to be lived, rather something to be endured. As a result, Revival ends up being a bummer – especially for anyone not in the blush of youth. It’s as beautifully written and characterized as ever, but there’s a melancholy to the entire book that was a little too pervasive for my liking. Recommended for die hard King fans only. All 500 million of you.