Oh, Stephen King, I love you so.  Yes, you have disappointed me at times, but for the most part you are the horror writer that brings me back, time and again, with your brilliant ability to create characters that feel real, comfortable and like people I want to hang out with.  You do not disappoint on that score with Joyland, an amusement park tale that isn’t all laughs.

Joyland is the story of Devin Jones and the summer of 1973.  Devin is 21 years old that summer and has come from his college in New Hampshire to North Carolina to work at the Joyland amusement park and earn some much needed money for the upcoming school year.  He has also had his first big heartbreak and boy, is he ever feeling sorry for himself.  Dev discovers that despite his wounded soul he enjoys working at the park, enjoys his co-workers and learning the carny life.  He still pines, but finds a few things to take his mind off that girl who done him wrong.  Some of those things aren’t really quite normal, unless you happen to be a character in a Stephen King novel.

Joyland isn’t one of King’s giant good vs. evil tomes filled with supernatural tomfoolery.  It’s a much smaller, more intimately scaled book revolving around one young man and the people he meets in just a few short months, an experience that will stay with him for a lifetime, but not the kind where the world needs saving.  Most of the book is about life in the park, and in 1973, as Dev makes friends and experiences life on his 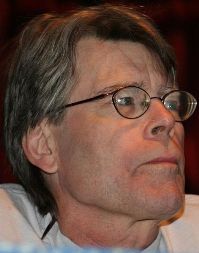 own for the first time.  He meets a couple of people with some special abilities involving, let’s say, inner sight, and finds himself involved in both an old murder case and the lives of a woman and her ailing child, but this isn’t a book steeped in either the paranormal or in horror.

Joyland lets King do what King does best – write a character.  Devin is a fully formed person, whose thoughts and emotions we understand and most people will relate to on some level.  He’s young at the time, and his older self (who is telling the story) often acknowledges both the folly and the advantages of youth.  His choices don’t seem foolish (other than the excessive pining – but other people’s romantic pining always seems foolish, something else the adult Devin readily acknowledges) and despite having less than no interest in amusement parks, I found myself truly enjoying the trip not only to Joyland but also back to 1973.  Devin is a very well written character placed in a lovingly rendered time period.

The peripheral characters are interesting and engaging at varying levels depending on their importance to Devin.  The very elderly owner of the park, his crew boss, the park manager, his landlady and another tenant are all bit parts.  Extremely well written and each with a purpose in the story, they are like accessories for Devin.  Larger parts are played by some of his new friends.  His fellow newbies Erin and Tom (also tenants at the boarding house), his friends Lane and () (also known as Madame Fortuna the fortune teller) who are full-time carnies, and the lovely Annie and her son Mike who has Muscular Dystrophy, all play important roles in the Evolution of Devin that summer.  King is not quite as successful with these mid-level characters as he is with Devin and the bit players, with some of them feeling a little thin even when they feature prominently in a section.

Overall, I thoroughly enjoyed Joyland, something I didn’t entirely expect from the description of the story.  You don’t need to be a carny buff to like this book, not at all – this is one for those of us who read Stephen King for his characters, not for his scares.  If that’s you, I wholeheartedly recommend Joyland.  4 stars out of 5.

Thanks to Tom at Titan Books for the review copy!