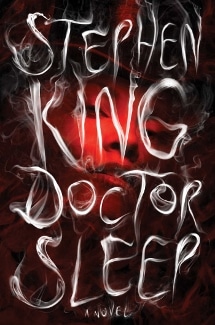 The Shining, The Sequel

No matter how rich, famous, beloved, acclaimed or just plain awesome an author you may be, it takes nerves of steel to mess with what is probably your most successful and renowned book.  To take on a sequel 30+ years after the original made you a household name?  Lunacy.  Then again, there’s a name for lunatic authors: Stephen King.  So why wouldn’t he pick up the story of Danny Torrance, and let us find out what became of that little boy who battled the demons of the Overlook Hotel in The Shining?  Because he is who he is, King does exactly that in Doctor Sleep.

This isn’t The Shining II – it may be a sequel, but it’s one far removed from the events of the original story.  Technically, it could be read and enjoyed by someone who had never touched a copy of The Shining.  But I don’t recommend that.  I read the original when I was 12 years old and I went back and read it again before I read Doctor Sleep, and I’m glad I did. If you’ve not read the original I recommend you do so before even finishing this review.  Seriously, go.  Off with you – this will still be here when you get back, white knuckled and scared to be alone in the house.

Now that we have that out of the way we can talk about Doctor Sleep.  We reconnect with Danny Torrance as he bumbles his way through adult life, unfortunately following in many of his father’s footsteps.  It isn’t pretty.  He still has the shining and it helps him make a living working in hospices across the country (until he inevitably gets fired for being a drunk). We catch up on what happened to his mother, and the Overlook chef who saved his bacon so many years ago. Even Tony, Danny’s inner friend who helped him through some tough times, gets a nod.  It’s Tony, in fact, who finally convinces Danny, now Dan, to settle down in a small New Hampshire town and try to get himself together.  He’s doing pretty well when he makes contact with…someone.  Someone who shines more brightly than even Dan in his childhood.

That someone turns out to be Abra Stone.  She mentally connects with Dan for the first time when she is only a baby.  By the time she is a young teenager her abilities have become enormous and she is being hunted by beings who feed off the shine.  It’s time for Dan to step up to the plate and pay forward the gift he was given so long ago by an old hotel chef.  It’s time for Dan to brush off his shine.

This book could have been such a huge mistake.  If those of us who read the original back in the day thought about Danny Torrance at all, it was as a little boy escaping a horrible place and riding a snowmobile into the sunset.  Do we really want to know him as a middle-aged drunk?  As it turns out, yes.  Yes, we do.  For all Dan is, he’s a pretty regular guy.  A screwed up, psychic, regular guy, but still very relatable.  His past makes him sympathetic to us, so we give him slack as he messes things up and cheer him on as he pulls them back together.  Abra is not just another Danny – she is her own character, with her own abilities, flaws and set of unusual circumstances.  As always, King’s characterization is so strong that we can’t help but feel connected to all of the people who end up involved in Mission:  Save Abra.

The main plot – the beings hunting those with the shining – is solid but not spectacular.  Doctor Sleep has so much more on its plate than just a simple rendering of a horror story that it’s best that we not become too entwined in an overly elaborate set of bad guys.  We need time to catch up with Dan, understand his life and come to like him as an adult.  We’re already invested in him, so the book needs to give us enough of his story alone before jumping to Abra and the new menace.    King does a great job balancing the nostalgia with the new material and ends up allowing us a full, beautifully developed grown up version of little Danny without sacrificing the horror that is the hunters.  Abra is annoying.  Abra is 13 – that’s her job.  She also has an amazing shine, and we get to learn a whole lot more about how the shine works than we did in the book named for it.  I loved the portions of Doctor Sleep that let us into Dan and Abra’s heads – and there are a lot of them.  What must it be like to try and live with such enormous psychic power?  Now we know.

I thoroughly enjoyed Doctor Sleep.  King did right by his characters from The Shining and gave us new, creative characters with whom to carve out a brand new story.  Nerves of steel, as I’m sure he discovered long, long ago, have a way of paying off for Stephen King.  4 stars out of 5 for Doctor Sleep and a solid recommendation for anyone who has read The Shining.  And please, read The Shining first – it will make Doctor Sleep a far richer experience.  You won’t be sorry.  Scared, but not sorry.