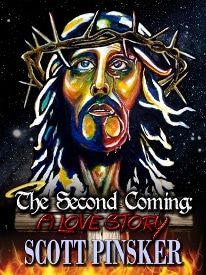 Full disclosure: I have absolutely no religious affiliation. More than that – I’m a religion slacker. I know the basics about most of the major world religions, but the details of none. I’m not troubled by this willful ignorance (though pardon me if I blaspheme – it isn’t intentional), but it does make the likelihood of me reading a book about the second coming rather remote. But never say never, for that is exactly what I have done, in the form of Scott Pinsker’s The Second Coming: A Love Story.

The Second Coming is about exactly that – the second coming of Christianity’s version of the son of God. Marketer and Fox News writer Pinsker actually gives us two sons – one true and the other false. He places them in the present day United States, one on the southeast coast and the other in Washington, D.C. Each being – one calling himself Joe and the other dubbed Israel by his followers – declares himself true and the other an imposter and both endeavor to sway opinion in their favor. In a world dominated by public opinion polls, TV ratings and social media trends, how does a divine being go about marketing itself? This is the story Pinsker sets out to tell, and he does so with some success.

The book surprised me by drawing me in despite some seriously daunting challenges. The Second Coming isn’t for people without religious knowledge – there are a lot of biblical and Christian references, allusions, parallels and other material (that I’m just going to label Bible Stuff) packed into this story. Not unexpected, but for the non-religious reader with no motivation to continue, I suspect the book would be put down permanently long before the reader had a chance to get into the story of the two competing deities.

But I did have motivation to continue – this was a review copy. If I say I’m going to read something, I read it. So I plowed my way through a lot of Bible Stuff that I didn’t understand, let references go over my head without worrying about it and got on with finding out whether Joe or Israel, or neither, was the true second coming of Christ.

In some ways my stubborn tenacity paid off. Pinsker has filled his narrative with archetypes of modern culture. A beautiful and brilliant lawyer who will do anything necessary to sell her chosen deity to the world. An arrogant and cruel political speechwriter who can’t see his chance at redemption through his own ego. A homeless evangelist with nothing to lose but his newfound faith. A frightened and timid prophet trying desperately to fulfill an uncertain destiny placed upon him by others.  All with biblical parallels aplenty, but interesting on their own as well.

The book mostly serves as an observation on how the current cultural and political climates in the United States would impact and be impacted by an event as monumental as the return of Jesus Christ. The question being: are we capable as a society of rising to such an earthshaking event or would we simply sensationalize and ultimately trivialize it like we do all other events which make their way into the public consciousness? On that level it’s a fairly thoughtful look at our divided society.

However, The Second Coming is also jam packed with preaching, proselytizing and various other Bible Stuff. Be prepared for sermons and lectures, questions without answers, and dusting off your confirmation class handbook if you want to really keep track of what’s going on. To be honest, I treated it kind of like Atlas Shrugged and didn’t bother much with the religious content that didn’t interest me (like I did with Rand’s political content) so I could get on with finding out what was going to happen to the characters and how the situation would eventually resolve. I wasn’t entirely happy with the ending, but that might have been because I didn’t understand half of what came before it.

Because of my religious slackery, I passed the book to a friend with considerable Christian religious training and asked for an opinion (and some translation). His take was that the book is pretty on target when it comes to biblical references and he agreed with me that Pinsker does a good job in setting up the two deities so that there is doubt on the part of the reader as to which is the true second coming – making for a pretty cool dynamic.

We also agreed that the symbolism is heavy handed and plays to both the political left and right, with body blows and ego boosts to both sides. He filled in some of the gaps for me but we also agreed that the book isn’t really particularly suited for those without a reasonably extensive Christian biblical education. If you’re like me, chances are you won’t make it past page 50. On the other hand, if you’re religiously literate and enjoy a good tale about how to market God, this may be something you enjoy. Pinsker definitely put his heart into The Second Coming, and it shows – the writing is filled with passion for the subject and the characters. But I think you have to be in a relatively small niche audience to truly appreciate his point of view and storytelling methods.

Thanks to Scott Pinsker for supplying Readers Lane with a review copy of his book.