Before I Go to Sleep

When I wake up in the morning I usually have the same first thought, “Do I really have to get up now?”  What if your first thought, every single morning, was, “Where am I and who is this man in my bed?”  In such a case you would most likely have a problem with either substance abuse or 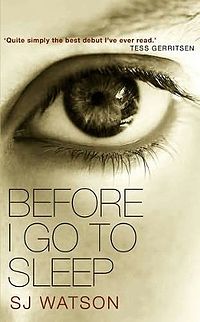 promiscuity.  Or maybe you have amnesia.  Guess which one applies in Before I Go to Sleep?

If you guessed promiscuity, I like the way you think, but you’re wrong.  Christine Lucas has amnesia.  She forms memories throughout the day but loses them all while she sleeps, reverting to a time before the injury that stole her memory.  Each day she meets her husband, is shocked by her much older physical self and goes through a small scrapbook given to her by Ben (the aforementioned husband) that explains the basics of her life.  Some days she might remember a bit of her past but it slips away again during the night.  She lives a frightened, fractured existence.

As we enter her story, Christine has begun to see a doctor who has some ideas that may help her recover and hold on to some of her past.  One of her lifelines becomes a journal.  Her doctor calls her each day, reminding her where it is and allowing her to read about her recent experiences and memories.  Slowly and with a lot of confusion, Christine begins to recreate her past.

Before I Go to Sleep has some strong elements.  Christine’s essential dilemma and the characterizations of her, Ben and her doctor all help us imagine the terror of being a stranger in your on life every day.  And, of course, as she begins to remember fragments of her history the story twists with lies and paranoia.  The premise and most of the execution work to keep the reader engaged, as well as feeling like we are sharing a bit of how a life like this would feel.

The only serious drawback is the pace, which sometimes slows to a crawl.  During some portions we are slowly building memories and collecting experiences through Christine’s journal and it just gets repetitious.  A rather obvious danger given the structure of the book (first person omniscient), author S. J. Watson manages to avoid this pitfall more often than not but be prepared to tire at points of the repetition of portions of the past.

Overall, Before I Go to Sleep is a decent read.  I definitely wanted to find out where Christine’s journey would lead and was willing to put up with the occasional slow spot to get there.  The characters are generally sympathetic and the plot complex and interesting.  3 1/2 stars and a recommendation for fans of unconventionally structured mysteries.