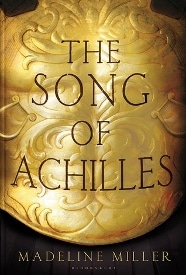 Does anyone else feel like their children learned far more mythology in school than they did? It seemed like a bit of a raw deal to me, until I read The Song of Achilles. For if I had been well versed in the traditional story of the famed warrior, I think I might not have been as engaged in this modern retelling of his story.

Author Madeline Miller teaches Latin and Ancient Greek. As a first time novelist, one might expect her prose to run a little dry in her adaptation of the story of the Iliad – and one would be entirely wrong. Miller chooses as her POV character a minor historical figure by the name of Petroclus, a young prince exiled from his home by his father, a disappointment as a son and not worthy as an heir. He is to be fostered and raised with many others in Phthia, ruled by the king Peleus. It is here that Petroclus first lays eyes on the boy who will shape his life – the young prince Achilles, son of Peleus and the Goddess Thetis.

Achilles is everything that Patroclus is not and for this, Patroclus does not look kindly upon the golden haired boy. But time and circumstance, as well as the iron will of a warrior prince who has been denied nothing in his young life, swirl together to give the exiled child an intimate view of Achilles’s life and legacy.

I’m not going to tell you anymore. If you know your Greek mythology, you already know the outline of the story of Achilles. If you do not – I won’t spoil it. But even for those who think they know all there is to know about the great young warrior will find surprises aplenty in Miller’s adaptation of the classic tales for a new audience. It is a story filled with Gods and Goddesses, fate and chance, destiny and choice, war and peace, love and bitter hatred. Really, it has everything a ripping good tale of intrigue needs to keep you turning the pages.

Miller makes her story fast paced without skimping on the details that make her reader care about her characters (a skill, to say the least). She makes an old story fresh without veering too far from the original mythology by using the POV of a figure about whom the legends say little if anything. Through his eyes we are allowed to see things the legends left out – the Achilles we were never allowed to know. And she does a wonderful job, weaving a very modern story using ancient threads.

I thoroughly enjoyed The Song of Achilles and will gladly read more of Miller’s work. It’s a fine adaptation and a well written work of fiction in its own right. All I need to do is have one of my kids read it and tell me how it compares with the traditional tales I’ve always envied them learning. 4 stars out of 5.