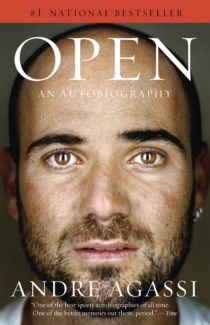 I think I’m still living in the 1990s.  I have to admit that from a tennis perspective, I haven’t really moved on from the years when Andre Aggasi and Pete Sampras battled for supremacy.  When Sampras retired in 2002 and Agassi followed him in 2006 my interest in professional tennis abruptly faded.  As a result I didn’t pay much attention when Aggasi published his memoir to much acclaim in 2009.  Over the ensuing years, I’ve come across enthusiastic recommendations that placed it amongst some of the greatest sports biographies ever written.  So I decided to travel back in time to the memorable years of must-see tennis and I ‘m excited to report that Open is every bit as thrilling as I could have hoped.  It vividly reminded me of why I was so enthralled those many years ago.

First, I’ll start by confessing that when it comes to Sampras versus Agassi, I always favored the latter.  If memory serves, Agassi was the truly pivotal figure; it seemed that few people were passionate Sampras fans, but people either loved or hated Agassi.  I’m not quite sure what it was about the man that I found so compelling.  He often looked scared, not concealing his anxiety very well.  He also didn’t partake in the false bravado that athletes so often use to hide their fear, or if he did it was easy to see through it.  To be honest, this long after the events, it’s hard for me disentangle my memories of the two Agassis.  They were almost two different people – the brash young mullet-sporting phenom who won his first major at Wimbledon in 1992 – eventually becoming #1 in 1995 – and the mature, bald tennis elder who regrouped and returned to #1 in 1999 after plummeting to as low as #141 in the world. 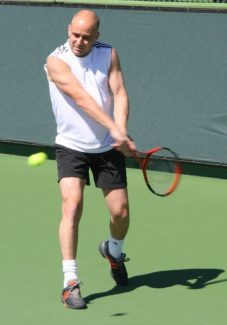 The thing that shocked people most about Open, when it first appeared, was that it reveals, from the very first page, that Agassi hated playing tennis, pretty much from the beginning of his career to the very end.  For more than thirty years, Agassi spent most of his time hitting tennis balls, but hated almost every minute of it.  After that astonishing revelation, the book goes on to successfully explain how such a uniquely horrible fact can possibly be true.

From his first ground stroke as a wee toddler to his final match at the 2006 US Open at age 36, he was almost always thinking about quitting.  The book captures this perpetual agony vividly, avoiding the easy clichés.  Agassi didn’t use his hatred to motivate him toward greatness; instead it controlled him, torturing him and dismantling his life.  It may be that it was this unspoken vulnerability, this dark secret that made him so compelling as an athlete.

Tennis may be the very loneliest of professional sports.  You’re surrounded by thousands of people in the stadium and many more watching from around the world, yet you’re entirely alone, relying only on your own wits to fight a battle against an equally lonely opponent.  You can’t even talk to your coach.  This fact is part of what makes tennis such a great spectator sport and Agassi’s story captures this intense reality with remarkable brilliance.

Of course, the man did have a life between matches and much of Open takes the reader behind the scenes.  Brooke Shields, Barbara Streisand and Steffi Graf all make the appropriate appearances, along with the many coaches, trainers, friends and ex-friends who played such pivotal roles in making him who he was and who he evolved to be.  Agassi’s almost surreal transformation both as a person and an athlete is one of the great sporting stories of all time and the book presents everything that went into that metamorphosis in riveting detail.

It’s hard to define exactly what it is that makes this such a great book.  While the ups and downs of Agassi’s life are inherently interesting, much credit has to go to his collaborator, the acclaimed journalist, novelist and memoirist J.R. Moehringer.  The writer spent much more preparatory time with his subject than is typical and it shows.  The emotional roller coaster of Agassi’s childhood, sporting career and romantic life is captured with intense detail and presented with smoothly cohesive prose.  It’s really a pleasure to read from beginning to end.

Quite possibly, there has never been a competitor whose athletic talents more poorly matched his personality and temperament.  In Agassi’s case, this mismatch resulted in an unceasing loathing of the life he found himself in.  Unflinchingly, Open presents this often painful story with astonishing clarity, while still reveling in the beauty and skill that made Agassi matches such a thrill to watch.  I recommend it highly, especially if the memories of 1990s tennis still inhabit a special place in your heart.

Check out Dave’s reviews of other sports (cycling) biographies:  My World   /   The World’s Fastest Man   /   Road to Valor