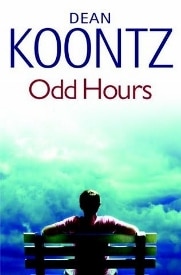 It’s been a while since I read one of Dean Koontz’s Odd Thomas books. I’ve always liked his young psychic character, and it was good to reconnect. In Odd Hours, the fourth installment in the series, we find young Odd living on the California coast, having been drawn there from his last stop – a monastery in the mountains – by his psychic magnetism. He doesn’t know what he’s supposed to do in Magic Beach, but he’ll recognize it when he sees it.

In the meantime, Odd is living with a retired actor, laying low and taking walks with his ghost dog. He sees a lot of ghosts, but not many animal ones, so he enjoys his new companion. He’s also picked up another dead singer to replace Elvis – who finally moved on in the last installment. This time he’s got Frank Sinatra along for the ride, looking for some help in crossing over from this world to the next. Odd just has to figure out why he’s suck here – like always.

One of his walks leads him to a young pregnant woman he has seen several times on his rambles. This time they encounter trouble from some thugs and he actually speaks to her. To his surprise, she knows who he is. She has also been appearing in a recurring dream – not really a good sign to appear in an Odd Thomas dream, they don’t tend to end well. Convinced he has to protect her, the two barely escape intact. The rest of the book involves much cat and mouse with various thuggish types, more psychic magnetism, and one extremely enigmatic young pregnant woman. As a secondary character, she’s more than a little infuriating, with her cryptic pronouncements and refusal to give important information. I sincerely hope she opens her mouth and makes with her story in the next book.

Odd Hours stands out from the previous Odd Thomas books in one way – it ends abruptly and without proper closure. The question of what Odd is doing in Magic Beach is answered to some satisfaction, but Koontz leaves nearly every other string hanging. Since the next book in the series has been out for a long time, it didn’t bother me too terribly much, but I definitely suggest having Odd Interlude (originally a 3 part digital filler and not necessarily part of the main series) and Odd Apocalypse (the recognized fifth installment) on hand.

Odd Thomas himself is as engaging as usual. He’s a simple guy, by necessity since his abilities have a way of making even simple things complex. Since he lost his true love in book one, he has been floating from place to place, still heartbroken but affable, and with a good heart and always good intentions. The books are written in the first person from Odd’s perspective, as if he were writing memoirs or a rather formal journal. This also dates back to the first book where he was told by his mentor to write down his life experiences. The device is still effective, helping make Odd seem less odd and bringing us into the world as he sees it. He’s self-deprecating and his experiences have rendered him far wearier than your average 21-year-old, but he’s a well-mannered young man still far from full adulthood.

Overall, Odd Hours is another good installment in the Odd Thomas series, one that you’ll need to read if you plan to go any further on (this is not a series to pick up anyplace but at the beginning) but not the strongest of the four I’ve read. Too many strings left hanging and his female companion is frustratingly enigmatic and undeveloped. 3 stars out of five.