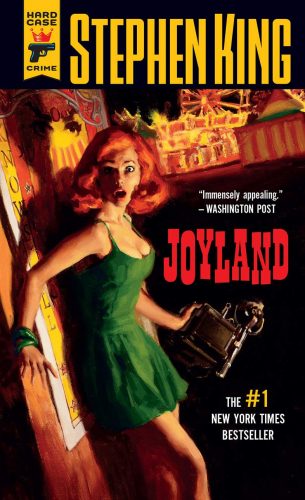 Coming of Age and Killers

Devin Jones is having a strange summer. It’s half magical, and half deadly. His long-time girlfriend has recently dumped him, and now that he is growing up, still a virgin, he is experiencing his first heartache. Everywhere at the college reminds him of the girl who left, and so this summer, instead of working at the college, he goes to a small-town amusement park in North Carolina, named Joyland, to get away from it all. He is seeking isolation, but what he finds is a strange kind of magic. Some of it is the ordinary magic of the carnival, watching the tips and tricks that go into making people happy. Some of it is just part of the strange magic of growing up and learning about life, feeling the sticky summer air and taking one day at a time. But some of the magic is a bit deeper, a bit darker. For instance, there is the mother who takes her terminal child to the beach everyday, a beautiful woman who has developed a sheen of hardness and a young boy who despite his illness still has so much life in him. There is also the long-ago murder mystery at the park. And tying it all together, somehow, are Devin’s simple days wearing the sweltering suite for Happy, the dog mascot, and dancing for children left on their own for the first time, coming to their own awareness of loss and how to make it through to the other side.

Joyland is a different kind of Stephen King novel, yet it’s also classical King. There are some smatterings of the supernatural here – that shining that comes through here and there – but the real drive here is a coming of age story overlaid by the discovery of a long sequestered human monster. The supernatural is a backdrop for the real action of growing up, moving on, finding one’s way, and the beauty of that luminal yet painful moment in life when we go from childhood to adulthood.

The mystery here is a little more crime oriented, a little more hardboiled. Although, hey, it’s King, so there is totally a background ghost with her Alice band, her messages, and her affinity for a dying child with the sight. The story is short (for King) and goes at its own langerous pace, matching the glories of summer and youth, but everything ties together in the end with the revelation of a killer in plain site, some dangerous ferris wheel moments, and the bittersweet nostalgia that is true King through and through.

My favorite books of King’s, admittedly, are still some of his older, more straight up horror novels – It (of course), From a Buick 8 (my personal favorite), Christine, Pet Semetary, Cujo, etc. But Joyland has earned a strong and memorable place among these greats. It’s King with a tinge of crime, a bit of amateur sleuthing, the glories of the carny soul, and some vintage flair. I was very glad this was chosen for my book club, and I look forward to the delightfully daunting task of slowly working my way through all of King’s novels.