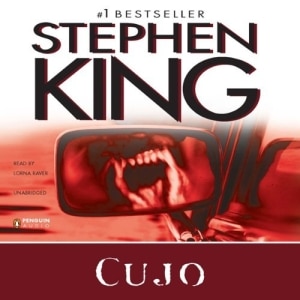 A Brutal Masterpiece: Nothing Wrong Here

Shrouded with the afterglow of haunted memories and a strange sense of foreboding, Cujo is a visceral tale, horrific because of its realism and the complex human dynamics surrounding it. Many recall this classic from the movie commercials, a battered Pinto and trapped mother and son against a dog suffering from the final phases of rabies. The novel itself is so much more – a torn patchwork of life, a maze of stitched together and tearing relationships, and the tragedies of happenstance that destroy even a loyal “good” dog. It’s all a mystery, the way things fall into place, knocking events together and coalescing into that one moment of redemptive possibility or that one missed moment for salvation. It all depends. Cujo is not about the horror we can see or even the horror that can very easily tear us to pieces. It’s about the late hours of the night when we see ourselves for what we are and for what we have left undone. It’s a novel about marriage, love, duty, raising children, careers, desire, fear, and the good old adage that shit just happens. It’s a novel about beginnings, middles, endings, and moving on and beyond.

Cujo, with its hypnotic atmosphere, multiple lines of sharp honed tension, life mimicking dilemmas and complicated characters is a fast moving story with universal concepts that touch readers in a direct, personal manner. Cujo himself, the infamous Saint Bernard, has a distinctive voice of his own, interweaving with the narrative to show the degeneration of a virus and the pathos ridden loss of a good dog, starring as the central conflict around which the other tendrils of the story are slowly drawn.

On one side of the tale we meet the Cambers, a disintegrating family lead by an abusive tyrannical father. As the impressionable young son begins to mimic his father’s “tough” behavior, Charity, his mother, introspects on her responsibilities as a mother and the options available to her while also giving us a disturbed look into the psyche of someone who has become so used to abuse, that it almost seems the better, the only option. Taking her son away to visit her wealthy sister, she believes that she can absolve herself of her son’s transformation by showing him a more full version of the world from which to make his ultimate decision, taking the reader down some real life dark hallways of abusive family dynamics and the fact that really, history does tend to repeat itself.

On the other side of the story, we see Tad, a four-year-old with a fear of the monster in the closet, a strange, prophetic version of his future and the inevitability of fate. Through Tad’s eyes, affectionately called the Tadder, we see the most horrific visions of all and experience the ultimate cruelty of fate. As a child narrator, he is eerily realistic and sympathetic, his perception of the world enough to draw us into a deep concern for him without feeling fake or off-putting to adult audiences. Tad is the most intriguing child character in fiction since Scout in To Kill a Mockingbird.

Donna and Vic Trenton, Tad’s parents, are engaging as well due to Donna’s recent affair, brought on by a crisis of conscience and a move dictated by her husband to remote Maine, and Vic’s tenuous job as an advertiser which has hit the rocks due to an unfortunate circumstance. The estranged couple, both battling their own internal demons, must confront the reality of each’s needs and the possibility of forgiveness or divorce.

All of these side plots, as they were, are just as compelling as the famous Pinto scene; each previous moment of trepidation builds our knowledge and connection with the characters. By the time Donna and Tad are being stalked by a mentally degenerated Cujo, our sympathy is so complete that we are in that car and regardless of the lack of physical movement in the scene (dictated by the situation) the tension and pacing remains superb and enthralling.  It’s  a testament to King’s talent that a scenario of a car bound woman and child can be so breathless and edge of the seat while simultaneously being deep and introspective. Warning, I may be a little in love with Stephen King.

Interestingly, King himself wrote Cujo during an alcoholic stupor and doesn’t even recall writing this, one of his best novels. Cujo is sharp edged and biting, brutal and visceral, and above all a beautiful, disturbing story that cannot be forgotten, its words and meaning living past the last page, its characters and events so real that you just might shed a tear or two. Highly recommended.

Note on the Audiobook: I picked up the audio book of this novel, read by Lorna Raver and feel that this is the only way to read Cujo. Raver reads with different intonations and accents making this narrative come alive. It feels as though we are hearing from multiple different people, Raver’s voice subtly changing, capturing the tones and essence of Maine, ultimately casting a spell on us, putting us in that baking Pinto with that pacing, ravening dog just outside.