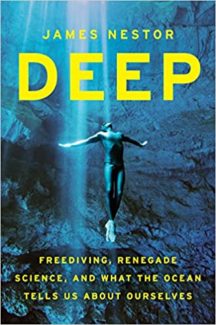 Hold your breath.   How long can you do it?   How much better could you get with a little practice?  Well, there’s a vanishingly tiny group of athletes who devote their lives to this endeavor, taking one big breath and pushing themselves to dive deeper and deeper into the open ocean.  As you might expect, free diving is incredibly dangerous, but it’s also remarkably interesting.  Having no idea what he was getting himself into, journalist James Nestor – on assignment from Outside magazine – found himself at the Individual Depth World Championships in the town of Kalamata, Greece in 2011.  Deep is his intriguing account, revealing much about humanity’s insatiable desire to compete as well as our planet’s mostly unexplored  deep sea habitat.

I think it’s fair to say that sports don’t get any more extreme.   Diving as far underwater as you can (assisted by fins or weights or both) with only one breath of air, hoping that you’ll have enough time and air to make it back to surface without passing out, is as crazy as it gets.   Nestor captures the frightful reality of this sport in all its terror, while conveying how he also found it disturbingly irresistible.

In a consistently readable style, the author presents an in-depth (sorry) look at this sport, but also explores how free diving has been used in the past and continues to be used commercially and scientifically.   From Japanese pearl divers to ocean research, Nestor takes the reader along for a consistently entertaining ride.  Sharks and whales and other sea creatures are much more accepting of the presence of humans when they (the humans) aren’t encumbered by noisy scuba equipment and boat motors, allowing for interactions and research that is simply unobtainable in any other way.  His interactions with massive sperm whales are clearly the highlight of the book. 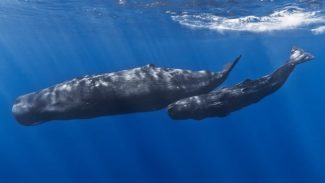 The book is also an engaging account of the author’s attempt to join the ranks of the free diving community.   He practices his breathe holding, sinus equilibrating, underwater swimming and mental fortifying skills before he takes to the open water and dives dozens of feet below the surface.  Foot by foot and second by second, he presents his gradual progress as he tries to find a way to be comfortable lounging 40 feet below the ocean’s surface for a minute or two.    It’s a chilling and often claustrophobic adventure that is consistently thrilling to follow.

But free diving only takes you so far.   The current world record for a human is 831 feet – held by an Austrian man who sustained significant brain damage in the process – but many other animals live and dive much deeper, down to more than 7,000 feet like squid-hunting sperm whales, all the way down 26,000 feet where a particularly sturdy species of snailfish was observed in 2014.  It’s not quite clear what she (or he) was doing down there, but she appeared to be doing just fine.  Nestor explores much of the science of ocean’s depths, layer after layer, in intriguing and riveting detail.

Free diving – also known as competitive apnea, which might be one of the most foolhardy combinations of words in the English language – is an inherently fascinating sport, but it’s also dramatically traumatizing.   It’s so dangerous that it’s hard to believe that it could ever become a mainstream (aka Olympic) sport, but it makes for really interesting reading.  Wisely, Nestor uses the sport and all its dangers to open a hatch into the full depths of the ocean, finding equally intriguing – if less brain damaging – topics to explore.  Bottom line?  Deep is a thrilling and personal account of one man’s deep sea journey that I can recommend highly to anyone who enjoys great adventure writing.