Secrets in the depths… 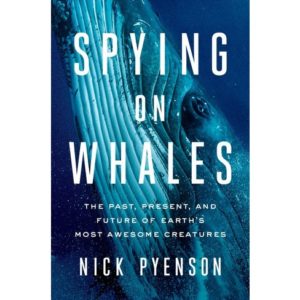 We’re living in the age of giants.  Often weighing in at more than 100 tons, the baleen whales are unequivocally the largest animals to ever grace the planet’s surface.  For a guy like Nick Pyenson – paleontologist, adventurer and whale fanatic – this makes it a great time to be a scientist.  In Spying on Whales, he reveals much of what’s known about these gentle uber-giants.  It’s an intriguing look at some amazing creatures.

The author divides the book into three sections, starting out with the past.  Pyenson explores how and why a group of hippo-like land animals returned to the sea about 50 million years ago, eventually evolving into the massive beasts we know today.  Basing much of his discussion on his own work as curator of fossil marine mammals at the Smithsonian, he reveals how the fossil record helps answer many baffling questions.  Most obvious of them all being, why did they evolve to become so ridiculously massive? 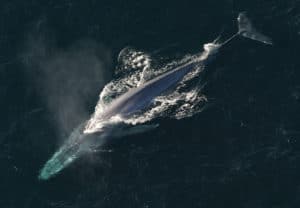 A blue whale on the move.

He then tells how he and other scientists are trying to answer questions about the handful of extant species in the present day.  While it’s rather unpleasant to realize that commercial whale hunting continues to this day – can’t whaling please join typewriter repair on the extinct job list? – there’s no better way for scientists to learn the finer points of big whale anatomy.   Ever the opportunist for science, Pyenson spends time on an Icelandic whaling ship, discovering entirely new whale organs in the process. 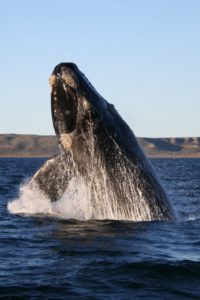 A southern right whale breaching off the coast of Argentina.

Lastly, the author speculates about the future and how the lives of whales might change as the planet rushes full speed into the Anthropocene.  Once the Arctic Ocean becomes free of ice – which might be as soon as next week at the current rate – marine mammals of all shapes and sizes will face plenty of new opportunities and challenges.  Pyenson is remarkably upbeat about the whole thing, which is nice for a change, even if I think he’s overly optimistic.

Pyenson’s efforts make it clear how hard it is to gain knowledge about the really big whales.  When all of what we know is gathered from rapidly decaying stranded whales, profit-driven whaling ships, widely scattered fossilized remains or brief observations from the ocean’s surface, it’s not surprising that there are massive gaps in our understanding of these astonishing creatures.   While there’s no denying the charisma of these giant beasts, it’s incredibly challenging to learn more about them.  In this readable and often quite personal account, the author captures this struggle, revealing the many ways that scientists try to answer even the most basic of questions.

Save the whales!  The plea harkens back to when I was a kid – way back in the ‘70s – when whales were uniquely imperiled and humanity needed this passionate cry for sanity.  Since then, whales have managed to do a bit better – thanks to the efforts of many – and the rest of the animal kingdom has been declining so precipitously that an appeal for any one group of creatures seems almost quaint.  This may be one reason why Spying on Whales is relatively optimistic in its outlook; at least for the moment, whales appear to be doing no worse than the rest of the planet.  Regardless of your hope – or lack thereof – for the future, this book is a great read for anyone interested in these entirely fascinating animals.

Check out some of Dave’s other reviews of books about marine life:  Voices in the Ocean   /   Voyage of the Turtle   /   The Devil’s Teeth