Voyage of the Turtle 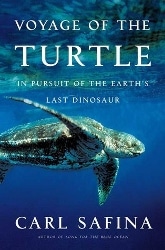 The word superlative scarcely does this impressive beast justice.  One of the largest living reptiles, the leatherback sea turtle is a warm-blooded swimmer that routinely crosses the full expanse of the Pacific Ocean at speeds as high as 20 miles-per-hour, fueled only by the flimsiest of prey.  Diving deeper than any other air-breathing animal, often for hours without interruption, the leatherback sports a uniquely-adapted brain that can even function without oxygen when necessary.  And that’s not all.  After many years and thousands of miles of travel across vast oceanic expanses, the mature female leatherback –guided by a cluster of magnetite crystals in her diminutive brain – manages to find her way back to her natal beach to lay batches of eggs.  Inspired by these remarkable creatures – who’ve been repeating this routine for the past 100 million years or so – award-winning nature writer Carl Safina spent much of the early 2000s traveling the globe in pursuit.  Voyage of the Turtle is the fascinating result.

While they’ve been indisputably successful over thousands of millennia, sea turtles didn’t evolve in a world full of fish hooks, floating plastic bags and hungry, egg-digging bipeds on beaches.  Unfortunately, these new obstacles to survival have caused all sea turtle populations to plummet over the past few decades.  Much of what Safina writes serves as an eloquent epitaph for the leatherback and its smaller sea turtle brethren, who have quietly plied the world’s oceans for ages.  But he also writes about the heroic efforts of numerous conservationists who frequently risk their lives in a last ditch effort to save these noble creatures from the ravages of modern humanity.

Traveling from Nova Scotia to Trinidad in the Atlantic and Costa Rica to New Guinea in the Pacific, Safina meets with scientists, fishermen and local sea turtle enthusiasts to learn more about the massive leatherbacks, which occasionally top the scale at 1500 pounds.  His work represents truly top-notch immersion journalism, whether he’s hundreds of miles from shore on a commercial swordfish boat over Georges Bank or hiking the beaches of the Bird’s Head Peninsula in Indonesia. 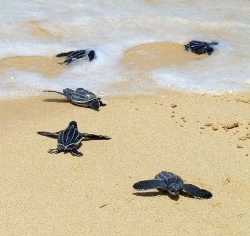 Hatchlings heading out to sea.

Despite the disheartening topic of anthropogenic extinction, the author’s optimistic approach to the topic makes the book not nearly as depressing as it could be.  He captures the beauty of these extraordinary and surprisingly graceful creatures with frequent moments of poignant prose.  The determined conservationists and experts he features not only provide loads of fascinating information but are so inspiring they made me want to quit my job and head to the beaches to defend the turtles’ rights to lay their eggs undisturbed and unmolested.

An eloquent and riveting account of one our planet’s most amazing inhabitants, Voyage of the Turtle is top-notch nature writing that provides a whole new perspective on the life of a the lowly turtle.  At times almost poetic, Safina’s powerful and relentlessly optimistic approach to the topic makes this a highly recommended work for any nature enthusiast.

Other reviews about the ocean and conservation: