Conditions of Love, The 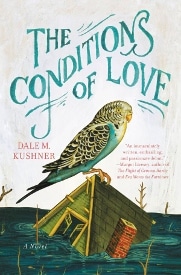 I am fully in favor of dysfunctional family fiction. Movies, TV, books – bring it on. In The Conditions of Love by Dale M. Kushner, main character Eunice is absolutely at the center of a dysfunctional family. Unfortunately, I was unable to find my usual level of enthusiasm for her messed up world. Pity, that.

As we enter her story, it is 1953 and Eunice is a child living with her single mother in the Midwest. Her father left them long ago, and her mother, who insists Eunice call her Mern (short for what, I have no idea) is eccentric and neglectful. Eunice is not well accepted by her peers – she’s too different from everyone. But she has a friend in neighbor and Holocaust survivor Mr. Tabachnik and pretends to herself that her father is not the bum her mother claims. She also learns how to take care of herself on some very fundamental emotional levels, since she has no real parents.

The Conditions of Love is Eunice’s story. From our first meeting in 1953, we follow her through the rest of her childhood, into young adulthood and beyond.  It’s a story of love and loss and survival in a time and place that isn’t particularly friendly to those who live outside the norm. Sadly, it also slowly reveals itself to be a story of women subjugating themselves time and again for the love of men who do nothing to deserve them and spurning those who cherish them.

There are some great characters in The Conditions of Love. Mr. Tabachnik; Mern’s good-hearted boyfriend Sam; Rose, who takes in Eunice after a natural disaster. Each forges a bond with Eunice, not out of obligation but out of basic human kindness. Unfortunately, those characters are not the ones around which the story revolves – this story revolves around faithless, feckless and abusive men to whom women are so devoted that they will destroy their own lives without hesitation. For Mern, that takes the form of neglecting the needs of her child in favor of chasing the fantasy of Eunice’s father. For Rose, in allowing a violent and dangerous man to destroy a life she painstakingly built for herself completely off the grid. For Eunice, too, eventually there is a man who treats her poorly and in return receives her undying devotion.

And there’s the problem. None of these women ever learn, nor is there any recognition by author Kushner that she’s created interesting characters who are in every case subjugated to unworthy men via their own ridiculous and unhealthy choices. While obviously this is only fiction, these women make me sad and angry. They overcome untold hardships and then allow the very people who caused many of those hardships back into their lives without question, at the same time abandoning people who love them without condition, never acknowledging the pain they cause or the wrongs they do – and never being held accountable. But it’s all in the name of love so it must be okay.

It isn’t okay with me, and ultimately I came to dislike Eunice, hate Mern, and feel sorry for every good person who loved them and was spit out in favor of the next pretty man. The book itself is plodding as we go through trials and tribulations alongside the increasingly unlovable Eunice and bear her endless delusional, self-imposed relationship drama. I can’t really recommend The Conditions of Love to anybody who doesn’t want to spend a really long time watching women destroy themselves over men, without ever gaining a bit of insight or even recognizing the pattern that plays itself out on repeat through the entire book. This one’s a miss. 2 stars.