Burning of Bridget Cleary, The 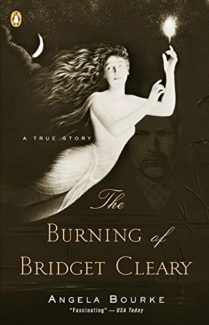 For those who are reading this on a remarkably clever little handheld computer, it may seem bizarre to think that magic still plays a role in anyone’s life.  But it really wasn’t that long ago.  It was 1895, in rural Ireland, and the disappearance of a young woman was generating all sorts of theories – foremost being that the fairies had abducted her and taken her to their nearby stronghold – until her badly burned body was found in a shallow grave not far from her home.  Irish historian Angela Bourke tells of this real-life crime and the trial that followed it in The Burning of Bridget Cleary, exploring the violent collision of the ancient world of fairies and magic with the modern world of evidence and science.

Not surprisingly, the story became quite a sensation when the press got a hold of it.  The horrible manner of Ms. Cleary’s demise as well as the fact that her husband and six of her family members all stood accused of involvement in her murder made the story a sensation much further afield than Ireland.

If you suspend any shreds of 21st century modernity, the story makes a certain amount of sense.  Bridget becomes ill and as the illness evolves, having failed to respond to various attempts at traditional treatment, the most likely explanation becomes that she is actually a victim of abduction by fairies who have replaced her with a lookalike.  To address this, her husband and family members proceed to kill her, or what appears to be her, because once the “changeling” has been dispatched, the “real” Bridget will return home shortly, safe and sound.  It sounds crazy, but Bourke explains where these ancient and deeply held beliefs originated and how, in the context of rural Ireland, they served an important purpose. 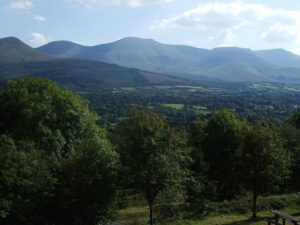 The Galtee Mountains in County Tipperary.

As the investigation proceeds, we learn that Bridget was never fully accepted by her husband’s family and how persistent financial stressors had created a significant rift between Bridget and her husband.  From a modern perspective there’s more than enough to serve as motive, making the whole fairy defense almost comically pathetic.  But Bourke’s goal here isn’t to belittle the perpetrators of this unquestionably horrible crime, but to reflect on their actions and use the story to teach us about ourselves.

It’s rare for a true crime work to have so much to say about the world, particularly the magical thinking that was the very essence of humanity’s ancient relationship with the world for countless millennia.  Bourke tackles this topic with clarity and expertise, using Bridget Cleary’s tragic demise as a stepping off point for thoughtful explorations.  The author does a great job of exploring the beneficial role that magical thinking played in the lives of the rural Irish, while at the same time acknowledging the horrible consequences that might arise as a result.  She also explains why this ancient mode of thought has persisted so long into the modern era.   Her efforts really pay off, successfully taking the reader back to a very different time and place and revealing truths that are easily forgotten in the modern world.

A deft balance of true crime story and immersive cultural exploration, The Burning of Bridget Cleary is much more than your typical true crime account.  It’s an intriguing look at the how humans used to view the universe around them.  In our science-filled modern world, we like to pretend that we’ve left magical thinking behind.  But our brains evolved in an ancient, fairy-filled world and there’s plenty of magic that still lingers, finding ways to sneak into our thoughts as we go about our daily lives.

Check out some of Dave’s other true-crime book reviews:  Lost Girls   /   True Crime Addict   /   The Spider and the Fly