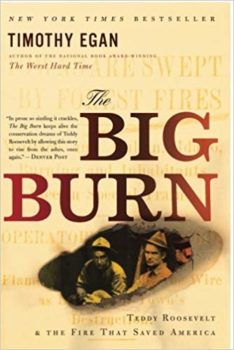 The new frontier was open for business.  As white Americans spread west across North America, sweeping aside any inhabitants who got in their way, it became clear that there were vast natural resources to be had. In the late 1800s, those with even a smattering of prescience realized that the plundering was just getting started.  Something would have to be done to make use of Nature’s abundance in a rational manner.  Maybe more than anyone, President Theodore Roosevelt was instrumental in promoting this view, but it wasn’t until 1910 following an unprecedentedly massive forest fire that the idea of conservation and rational use gained a foothold in the public mind.  In The Big Burn, journalist and author Timothy Egan tells how two hot and dry days in August would go on to change American history. 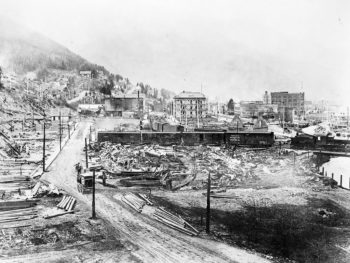 The town of Wallace, Idaho in the aftermath of the fire.

The preceding winter and spring having been exceedingly dry, by mid-August of 1910 there were thousands of small fires popping up in the forests of Idaho, Montana and Washington.  Increasing

winds eventually corralled the fires into an enormous conflagration that proceeded to devour three million acres of woodlands, including numerous small towns that were in its path.  The young and inexperienced rangers of the newly formed US Forest Service – and the countless volunteers they scrambled to gather together – were entirely unequipped to resist the forces unleashed. 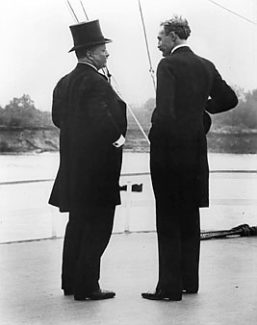 President Roosevelt and Gifford Pinchot in 1907.

But resist they did and the tales of heroism that resulted served to publicize the reality of life in the still rather wild west.  The US Forest Service was no longer an object of derision, but an increasingly valuable public endeavor.   The service and its rangers had stated their case and the public was finally listening.

However, Egan’s saga is much more than just the heroics of forest rangers and fire fighters; it’s also a look at one of the more unusual relationships in US presidential history.  Quite possibly America’s greatest bromance, the “peculiar intimacy” between Teddy Roosevelt and Gifford Pinchot – founder of the US Forest Service – played a key part in launching America’s conservation ethic.  Both men were eccentric in the extreme, but seemed to find a bond in the emotional physicality that the natural world can evoke in those who care to confront it.

Resulting in the death of 87 individuals, the 1910 fire was one of the most destructive natural disasters in US history.  Egan presents a truly riveting description of the tragedy as well as the birth story of the American conservation movement, making The Big Burn thoroughly entertaining reading for any history buff.   Highly recommended.