British Aristocrats in the Wild West…

When I think of American pioneers, I envision Laura Ingalls and her family living by their wits and barely scraping by.   But during much of the 19th century there was a different kind of pioneer, wealthy British aristocrats searching for a life of adventure and excitement on the new western frontier.  Acclaimed BBC documentarian Peter Pagnamenta tells their story in Prairie Fever. 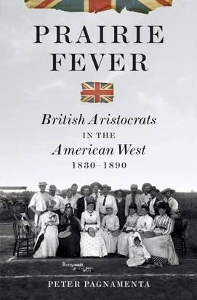 The author tells the stories of dozens of individuals from the early fur trapping days of the 1830s through the rise of the railroads and the accompanying cattle boom that fizzled out around 1890.

Pagnamenta describes two major motivating factors that drove these rich and pampered Englishmen to seek out a life of duress and hardship on the Great Plains and Rocky Mountains.

First, the romantic notion of a limitless wilderness populated by noble savages and a bounty of wild game had a strong appeal for idle blue bloods.  London was overpopulated, full of foul smog and most of Britain had been tamed and hunted out.   Stimulated by stories like James Fenimore Cooper’s Leatherstocking Tales, many affluent young men found the increasingly common alluring images of the American West irresistible.  The idea of blasting away at massive American buffalo while chasing the herd on horseback was particularly appealing.

The second driving force was the reality of primogeniture, a fancy word for the strict British tradition that allowed for only the eldest son to inherit the father’s wealth.   Due to this custom, there were plenty of younger brothers wandering England with no particular future or prospects.  Striking out on a wilderness adventure seemed like a better alternative than staying home to watch big brother move up in the world.

Of course, both of these factors were supported by one additional detail.  Daddy’s substantial bankroll was always there to bail them out.  Receiving a generous allowance, the majority of these dreamers were confident that an adequate financial safety net would save them should their ill-conceived plans go awry.

While I found the topic to be adequately interesting, the book never really captured my enthusiasm.  The author’s dry – almost nothing but the facts – writing style was one obstacle, but more than that may have been my own latent xenophobia.   Many of the American settlers found the stodgy, imperious British interlopers to be intolerable and I tend to agree with them.    The majority were a bunch of spoiled brats and I tired of all the Lords, Dukes and Earls after a while – not to mention the Marquis of Tweeddale.  It was hard to find a character to actually care about.  Maybe I would have enjoyed it more if Pagnamenta had taken a more denigrating tack.

In the end, Prairie Fever is a scholarly look at a part of the 19th century that I knew little about.   While it’s fair to say that it’s an important addition for any American history buff, I didn’t find the read that enjoyable.  Not so jolly good.