Immortal Life of Henrietta Lacks, The

I have to be honest.  I don’t get the big deal over this book.  The Immortal Life of Henrietta Lacks is a New York Times Bestseller, we read it for book club and umpteen people have told me how fascinating it all is.  Admittedly, I don’t read a whole lot of non-fiction, but this book really isn’t that engaging. 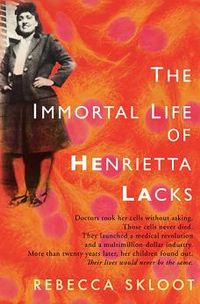 There are four basic stories happening here.  First is the life story of a woman named Henrietta Lacks, who was born poor in the segregated south and died young of cervical cancer.  Second is the scientific story of how the cells from her initial tumor became the world’s first immortal cell line, to be used in countless cell culture experiments to this very day.  Third is the story of the husband and children she left behind and fourth is the story of how the author came to write this book.  That’s too many stories for one book.  At best, this is a mash-up of an interesting journal article about cell culture and ethics for a science magazine, two human interest stories about inbreeding, poverty and ignorance and a self-indulgent short story about a researcher inserting herself into the tale she is purporting to tell.

The Immortal Life of Henrietta Lacks takes, as its core, the science of cell culture and attempts to explain it and its origins.  Wrapped around that core is the life story of the woman whose cells happened by chance to be the first successfully grown for any length of time in the laboratory.  Wrapped around that is a whole bunch of craziness that dilutes the science.  As author Rebecca Skloot loses herself in the struggles of the Lacks family she loses sight of her purpose – to honor the woman whose cells gave rise to one of the most significant scientific advances of our time and bring that science into the public consciousness.

Her first misstep is jumping through time.  She vaults back and forth from Henrietta’s childhood to the lives of her adult children and back into the laboratory first using the tumor cells.  She does this over and over, basically repeating the same biographical and scientific information in each time period.  By the middle of the book I was exhausted and sick of the basics of cell culture.  I got it the first 12 times; I didn’t need her to repeat it yet again.

Skloot’s second misstep is inserting herself into the lives of the Lacks family in order to learn more about Henrietta.  She’s simply too intertwined with them to see that their story is not interesting – they are angry and paranoid and no matter how many times they hear it do not understand what happened to their mother or her cells.  The author dragging them through the details over and over just inflicts those same details on the reader – yet again.  What became of Henrietta’s children has very little to do with what became of her cells and a whole lot to do with people like the author who felt the need to pry into the family until they broke under the strain.

The Immortal Life on Henrietta Lacks does contain some interesting scientific history as well as some pertinent questions about the ethical issues of human tissue research.  For those things it’s worth a bit of discussion.  The layers of supposed racism and theft and unfairness poured over that foundation are little more than histrionics fed by a media machine not content to let the amazing science and simple life of a woman unfortunate enough to die young  stand alone.  I would have appreciated a much abbreviated book that told me (once) about cell culture, Henrietta’s amazing cell line and the story of her life put in historical perspective.  The rest is unnecessary filler and, frankly, boring.  I can’t give the book more than 2 stars out of 5 and I don’t recommend it.