On the Face of Things 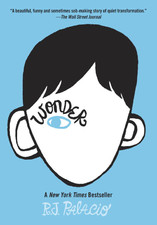 Did you ever wonder what it would be like to be different from everyone else?  Everyone wants to be unique, of course, especially in their formative years, yet no one wants to be so different as to really stand out in any negative way.  But what if you had no choice?  What if your face itself were so vastly different from those of your peers that you could never hide, never fit in, never be “normal”?  That’s the world in which August Pullman lives in the YA book Wonder.

Auggie was born with multiple craniofacial abnormalities.  He is now going into the fifth grade and has had over 20 surgeries, none of which left him looking anything at all like his peers.  His face frightens small children and results in derogatory comments from people of all ages.  He is very, very disfigured by genetic misfortune.

We join his story as he is pondering the notion of going to school for the first time.  He has always been home schooled, mostly because of his surgeries and other medical complications, and his parents are very protective of him (and rightly so).  He is generally accepted by those who know him – his sister and her friends, the people on his block – but venturing outside that safe area is a daunting prospect.  After deciding it’s time to go for it, Auggie is presented with exactly the type of challenges you would expect.  Bullies, isolation, rude questions and more.  There are also a few good things, but only a few – especially at first.  Wonder is a chronicle of Auggie’s first foray into a hostile world and how he and his family come to terms with how his life is likely to be.  Forever.

Wonder is written for a middle school audience, so the story is fairly simple and the characters pretty broadly drawn with more than a few stereotypes thrown in.  The parents are a little too fabulous, the bully is a little too single faceted, the cool girl a little too impervious to criticism from her peers.  But the main characters of Auggie, his sister Olivia, and his new friend Jack are superbly written.  They are complex, confused, hurt and baffled about how they should best deal with an unwanted, nearly untenable situation.  We feel their hurt and appreciate that it is not ours.

Wonder is an excellent book for its target audience.  It teaches (without being preachy) valuable lessons about tolerance, compassion and kindness while helping kids be grateful for things they take for granted every day.  This is no ugly duckling to beautiful swan story – Auggie will never be beautiful.  It’s about really seeing beyond a major physical impairment and trying to connect with the person trapped in a visage that will never be palatable to the masses.

My only real complaint about Wonder is that Auggie and his classmates act older than their stated age.  They behave much more like eighth graders than fifth.  It isn’t a big quibble, but it would make more sense of author Palacio had just made them a little older.  The other issues of broad characters and some stereotypes are simply indicative of the age of the target audience.  4 out of 5 stars for Wonder and a strong recommendation for ages 10 and up.