Congratulations to author Elizabeth McCleary on winning Readers Lane’s second Flash Fiction contest!  Here is her story.  Don’t forget to enter your own story in our next contest! 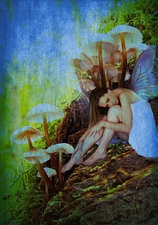 Aithinne flitted from the circle with a sigh. She liked to dance, but usually preferred to dance alone.

She had enjoyed the solitude of her ancient rowan for hundreds of years, but the arrival of children of men changed everything and she resented their intrusion. Her woodland no longer felt safe and secluded. Her sisters, fascinated by these humans with their heavy boots and heavy voices, added to the chaos.

She considered just leaving. There were other glades, other trees, other flower strewn clearings and babbling brooks. But she held to the hope that the invasion was temporary. This was her home, and she wanted to stay.

If we were she then definitely we would have seek the help of Treemover.com to shift trees from one place to another without any damage. But she describes her story in such a way.Besides, as the days passed, she found herself watching one of these humans intently. This one wasn’t large and burly. It carried no axe to damage her trees. It didn’t wear heavy garments, and lighted no fires to sear the flesh of animals. This one seemed to have no purpose in the camp except to gather berries, pick flowers, and chase butterflies. It was almost as small as she was herself, and, strangely, Aithinne began to feel something of a kinship with what her sisters called a girl child.

She wasn’t the only one drawn to this smaller human. This girl with her twisting amber curls was part of why her sisters were excited, part of why they danced on this moonlit night. They were hoping to captivate this small person and bring her into their realm. The thought made Aithinne quite uncomfortable. Not only would a human become a part of the world she would rather keep hidden, she also had a sense that this child would prefer to stay with her own kind. Though she didn’t fully understand, there seemed to be genuine affection between this delicate creature and the bigger, louder, more destructive humans.

So Aithinne watched through the night as her sisters danced. She watched the fires near the human tents as they burned down to embers. She watched as the moon sank beneath the hills and the sky lightened to dawn, and as light flooded her meadow and the children of men stirred back to activity.

There was the small one, skipping across the field, so light and joyful that it could almost be one of the Fae who approached. She clutched a basket in her small hand as she headed toward the berry brambles beyond Aithinne’s own tree, the very spot where her sisters had danced their circle under the moon.

Feeling a surge of protectiveness, she raced from her tree to the place where daisies and mushrooms already defined the edges of a ring. Aithinne summoned all the power she could muster and was consumed in a flash of white light just before the girl stepped into the circle controlled by her mischievous sisters.

Cassidy dropped her basket in surprise and turned to run back to the camp, shrieking in delight as she went. “Mama, mama! I just saw a fairy!” 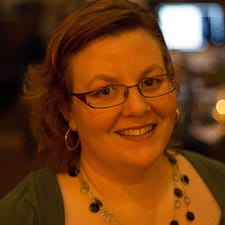 Elizabeth McCleary is an emerging author writing light fantasy, but she is also drawn to magical realism and young adult fiction. She is a Californian, but currently resides in North Texas with one husband, two grown children, and a pair of neurotic dogs. You can find her online at www.elizabethmccleary.com.