Good Girl Is No Gone Girl 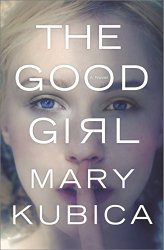 Oh, the fractured timeline. It’s a tricky, tricky beast, especially when you’re tip-toeing around some crucial event that cannot be revealed without spoiling the whole plot. Structure a whole book using that method and really, you’re just playing with fire. Unsurprisingly, first time author Mary Kubica gets burned in The Good Girl.

The Good Girl revolves around the abduction of Mia Dennett. Mia is the black sheep free spirited daughter of a prominent judge and his checked-out wife. The book not only jumps between the abduction (labeled Before) and the PTSD amnesia Mia suffers after her rescue (labeled After) but between three narrators. So one chapter will be about Eve (the mother) Before, the next about Gabe (the detective) After, the next Colin (the abductor) Before, and on and on and on until Before and After meet at the climax of the book. It’s a confusing and muddled structure that is supposed to build tension but feels more like a gimmick to flesh out a thin story.

None of that makes The Good Girl an actively bad book. It’s relatively engaging, and Kubica definitely succeeds in making her reader want to know what happens at that crucial junction of Before and After. The After portions are particularly interesting as Eve tries to reestablish a connection with Mia that was lost long before the abduction. Colin is a pretty good murky antagonist, someone with a full story of his own rather than just a blank face holding a gun on a frightened girl. Mia is more of a cipher – her actions are hard to interpret, her emotions are blunted and in After she doesn’t remember or feel anything. The judge is an acceptably awful secondary villain, a father who cares more about his image than his child or his wife. Gabe is mostly bland and uninteresting as the voice of the police – attempts to flesh him out are largely unsuccessful and he ends up less likeable with every effort.

Overall, I wanted to like The Good Girl a lot more than I did. The premise – an abduction so traumatic that the victim completely blocks it – is decent, but the execution is flawed enough to prevent the book from developing any flow, jerking around between characters and time periods without providing enough satisfactory content in any chapter to keep the book from becoming plodding and dull through most of the middle section. Despite some decent twists at the end, it isn’t a satisfying read. 2 stars out of 5, but because of the promising premise, twists and some good character writing I look forward to seeing what Kubica writes next.