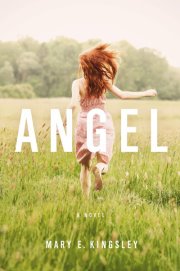 Every kid probably feels at some point that the entire adult world is conspiring against them, keeping vital knowledge to themselves in order to keep children ignorant of the world.  You know, like what that person really said in the bleeped out part of the TV show.  Angel Bishop certainly feels that way, probably because her family refuses to talk about the one thing she desperately wants to know – why her father abandoned them.  Some kids have more legitimate paranoia than others.

In Mary E. Kingsley’s novel Angel, we enter the title character’s life as she enters her teens.  Always a volatile, confusing time, Angel has more than just hormones to make her miserable.  She lives with her mother and grandmother Naomi in a small Tennessee town in the early 1970s.  Her father left when she was a baby and her aunt Patsy lives in a nearby nursing home, having been “crazy” for many years.  Naomi is her father’s mother and a devout Christian of the fire and brimstone variety.  Her mother is very reserved and rarely speaks about the past.

Nobody speaks about the past and that is Angel’s problem.  She’s gone through life assuming that her father’s absence is her fault, as he left shortly after she was born.  All anyone tells her is that he left to find work.  But he never has vacations, never writes, never sees them.  Her parents never divorced, either, adding to the mystery.  Angel also has a best friend whose mother is dying of cancer and is self-absorbed and shallow in her grief – wrapping herself in the drama of middle school as a shelter and annoying Angel to no end in the process.  How is a girl supposed to grow up when she has half a family and no one will tell her why?  A phone call announcing that her father will return for Thanksgiving turns her entire world upside down with the promise of fulfilling her lifelong dream and the terror that comes with that promise.

Angel sounds like a YA book, but it isn’t.  Though told in Angel’s young voice, the time period references and the subtle complexity of the main story make it more appropriate for the adult reader.  No 13-year-old is going to know who Jim Croce is or relate to tuning in every night to listen to your favorite FM radio DJ.  The relationships among the adults are also more complex than the average teenager is going to understand.  Kingsley doesn’t reveal anything fully, it’s important to be able to read between the lines, understanding the social mores of the time period and the difficulty of living with an in-law.

For the adult reader Angel is on some levels a treat and other levels a little frustrating.  I loved the time period references – the heartache that comes with the loss of interest in messing around outside all summer, the longing to stay a child, the pull of that faceless DJ.  The story is also fairly engrossing – the truth spun out slowly, keeping the reader engaged.  Angel is paced very well, balancing the coming-of-age portions with the mystery of Angel’s father and adding a very well developed main character.  The frustrating portions came from spending the entire book with a 13-year-old.  I liked Angel but at times grew weary of her immaturity and lack of insight.  She has a stubborn agenda that doesn’t always make her particularly endearing and the book fails to acknowledge that her schemes to make her family whole are creating hurt where it isn’t necessary.

Overall Angel is a very well put together period piece about family, secrets and the existential angst of being a teenager with serious life issues piling on top of estrogen overload.  Getting a little weary with the foolishness of the main character is really pretty minor in the face of all that is good about the story and writing.  4 stars out of 5 – recommended.