I don’t come from or live in a military family.  I’ve never really been able to imagine how stressful it is to live with the 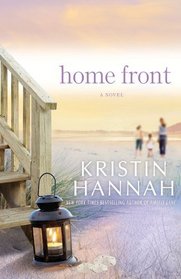 knowledge that your loved one(s) could be shipped to a dangerous location at any time.  Thanks to Kristin Hannah, author of Home Front, I feel like I can more easily imagine, but could no more handle, the fear and anger and heavy mix of other emotions that comes with loving a soldier.

Jolene is a pilot in the National Guard.  She’s been a member of the Army since she was a young woman, orphaned by negligent parents and completely on her own.  The Army was her first real family.  She’s now married to Michael, a lawyer without military ties, and they have two daughters, pre-teen Betsy and 4-year-old Lulu.

As happens in marriages, Jolene and Michael have become distant – the details and stresses of life overwhelming their sense of romance and connectedness.  The death of Michael’s father in the recent past has caused him to withdraw further, widening the gap between the spouses to the point where the union is extremely fragile.

Then Jolene is deployed to Iraq and the world falls apart.  Michael is angry – he has never been supportive of her military service and feels betrayed now that it is making demands on him.  Jolene is frustrated and afraid of leaving her children, angry at Michael for his abandonment of their marriage, but knows this is a commitment she must fulfill.  These soldiers are her other family – she takes her duty to her country very seriously.

Hannah lets her characters speak in turns. The book is written in the third person, but from different points of view.  In the beginning we see through Michael’s eyes, and then Jolene’s – a pattern that continues throughout as they struggle with events both together and separately.  At first Michael is the villain – selfish, petulant, irresponsible and ignorant.  As we come to know all the players, the field becomes more even – every character has moments of charity and moments of ugly selfishness.  Both Jolene and Michael are very well developed.

The peripheral characters come in the forms of the children, Michael’s mother and Jolene’s best friend Tami.  None are as well developed as the couple, but all add to the atmosphere as well as being the voice to our thoughts on the behavior of the main characters.  The only character I actively disliked at times was the pre-teen daughter.  I know adolescence is hard, but there is simply no way a child of mine would be allowed to behave as she does and go without stern reprimand.  I feel like Hannah stereotyped teenagers are petty and relentlessly selfish – pigeonholing them like most adults do and writing a weak character as a result.

The heart of Home Front is in its depictions of the loneliness, fear and sadness that are part and parcel of a military family with a member in active deployment.  No matter your politics or personal feelings about this or any other war, it’s heart wrenching to watch a family torn apart as its adults struggle to cope with the consequences of choices made long ago.  The book tends to be a little one sided in demonizing those who do not actively support fighting troops regardless of circumstance, but that’s the prerogative of the author – she is telling a story about a military woman.  If that’s really not something you think you can tolerate, simply steer clear of the book.  For others it’s an interesting and emotional look inside the realities of where our soldiers go when they get deployed and how hard it is for them – and their families – to come home.  4 stars out of 5.