Young Adult fiction teems with fantasy worlds.  Those of the dystopian variety were the flavor of the moment in 2011, but there’s always room for a good old fashioned feudal setting in which to plop our teen protagonists.   There’s 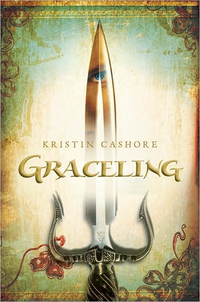 something so very appealing about young damsels and princes having to fight against a ruthless system of kings and lords.   Graceling hands us not only those very kings and lords, but a heroine who is seen as chattel not only for her gender but also for her Grace.

Katsa lives in the Middluns, one of seven kingdoms.  She serves her king, Randa.  Katsa was brought to the king at a young age because she is Graced – she has a special skill as indicated by her one green eye and one blue.  All Graced children are brought to the king, long before their particular grace is revealed as they age.  If the Grace is of use, the king keeps them at the palace, if not they go back to their villages, usually to be shunned.  People fear the Graced.

So what does it mean to be Graced?  It can mean anything, but it always means a heightened ability to do something.  For Katsa it means a greatly enhanced ability to fight and use weapons.  She is a perfect tool for a vengeful king and he uses her to punish those who defy him.  She is widely feared and rightly so, for she is a deadly young woman.  She also hates her king, his cruelty and the role she is forced to play.  So much so that she has formed an ever expanding group of those willing to protect the innocent from the bickering, violent kings across the kingdoms.

Katsa does not hate her Grace.  It’s a part of her and she trains and explores its limits and hones her abilities.  If she does not she becomes restless and agitated – her Grace demands that she pay it attention.  During a mission to rescue a kidnapped royal from another kingdom, Katsa meets another Graceling, this one from the peaceful Leinid kingdom, a meeting that will change her outlook and her future as she explores her limits and her conscience.

I like a strong heroine and Katsa is definitely that.  She’s very much in charge of her physical abilities.  She is emotionally weak, however, so the story does leave room for a damsel in distress element that I would normally find tiring.  In this case, author Kristin Cashore is able to make the prince in the equation, Po, likable enough for me to root for both the relationship and for his personal success.  Katsa can be irritatingly stubborn and skittish, so the even tempered, mellow Po is a good balance.

The basic premise is interesting if not particularly earth shattering in its creativity.  Cashore wisely chooses to allow the Graces to evolve – what you see is not precisely what you get.  That evolution leaves room for both character development and future story lines.

Graceling is a fast read for an adult – the pace is even and the writing engaging.  Teens will surely like the romance as well as the intriguing premise.  There’s also plenty of action for those looking for a little adrenaline in their YA fiction.  Teen girls are definitely the target audience and for them I highly recommend Graceling.  It’s also an excellent choice for adult readers looking for a trip into the breezy world of YA fantasy.  Cashore creates an inviting setting and fills it with likable characters on a noble mission – the perfect formula for a successful series.  The second installment, Bitterblue, is available now.  I know I’ll be looking for it.