Art of Being Rebekkah, The 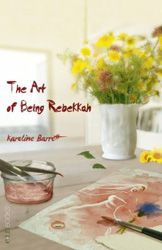 What happens when the culture in which you are raised is in many ways diametrically opposed to the greater culture in which you live?  Author Karoline Barrett takes on just such a dilemma in the novel The Art of Being Rebekkah.   Rebekkah is a young wife, one raised in a very conservative Jewish family.  When her first love is in a tragic car accident, she marries an older, stable and reliable man, one with whom she plans to have a family and run a proper Jewish home.

The problem is that Rebekkah isn’t quite cut out to be a proper Jewish wife, in the rigid context that she knows.  She is more than willing to perform – in fact revels in – the many rituals and strictures of the rules of keeping a Jewish home, but finds herself chafing against the dictatorial demands of her evasive and strident husband.  As she matures from a young, grief stricken girl into a grown woman with secrets, opinions and doubts, she finds that her life is not turning out at all in the way she predicted.  For someone raised to know exactly what was expected of her, exactly what she wanted, exactly the life she was supposed to lead, such a circumstance makes for a whopping load of spiritual and cognitive dissonance.

The Art of Being Rebekkah starts out really strong.  Rebekkah’s husband is thoroughly unlikable, making her very sympathetic, and the details of her culturally proscribed limits, obligations and rituals are fascinating.  As a painfully monocultural reader, I really enjoyed the look into this conservative Jewish community and was quite taken with Rebekkah as a very young woman with the weight of an entire cultural heritage placed on her shoulders.

So for the first half of the book I was completely entertained, and I think educated to a certain degree.  Unfortunately, as Rebekkah’s carefully planned life begins to unravel, so does the structure of the book.  We move away from the woman desperately trying to figure out how to maintain her identity as a Jewish wife while at the same time refusing to be bullied and lied to by the man she is supposed to obey and upon whom she relies for virtually everything.  Instead, Barrett spirals into a combination of a slow, repetitive crisis of faith and a Harlequin romance.  Rebekkah’s earthly problems find solutions far too easily, while her spiritual ones bring the story to a screeching halt every time she stops to indulge her guilt, doubt or never-ending indecision concerning her Judaism.

The end result is a disappointing book, but one that shows a lot of promise from author Barrett.  She does a great job giving us solid characters and a very interesting situation (and series of mysteries, secrets and revelations) when Rebekkah is dealing with the dicey problem of her husband, but strays too far afield in the second half of the book.  I enjoyed her writing style and hope she is able to tighten up future books.  2 stars out of 5 for The Art of Being Rebekkah.