Fault In Our Stars, The

Cry Me An Ocean 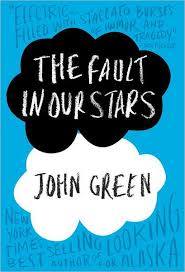 Red, puffy eyes are not a good look for me.  Seriously.  And I’m a little pissed at author John Green for forcing them on me.  I’m not a big crier when it comes to books and movies, but his The Fault In Our Stars had me weeping and hiccuping and snot nosed by approximately chapter three.  Do not read this book without an adequate supply of tissues.

Don’t get me wrong – this is not a bad book.  In fact, if it weren’t so well written it wouldn’t have anywhere near enough emotional punch to squeeze tears from my miserly ducts.  The Fault In Our Stars is a book about children with cancer.  Yeah, I know, right there it’s got some of you weeping.  But it isn’t at all what you might expect from that simple description.

The story is that of Hazel Lancaster, aged 16.  She has survived stage 4 thyroid cancer but is left with metastases in her lugs.  Those aren’t going anywhere and are being tenuously controlled by an experimental drug.  She needs supplemental oxygen all the time and breathing is a major chore.  Hazel’s parents worry about her solitary nature, thus leading to her attendance at a support group for young cancer patients.  She hates it.  But it is here that she meets Augustus Waters who will very literally change her life. 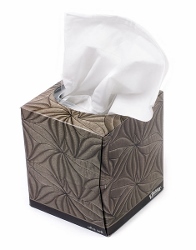 You may need more than one box.

So yes, this is the story of a teen romance.  It’s also the story of young people facing death long before their time.  An ill-fated love affair if ever there was one.  It seems like the book should write itself, with courageous kids and loving parents and heroic medical practitioners.  But author Green simply doesn’t see this world like that.  He sees it through the eyes of Hazel and Augustus, two people living day to day, trying to come to terms with their mortality (and that of a lot of people they know) long before they are really ready to do so (if anyone is ever ready).  They are smart, practical, sarcastic, funny characters so fully developed that if you have a heart, it will ache for them more with each passing page, each little bit you learn about them, each interaction you witness.  They are sweet and precocious without ever once feeling bratty.  They are definitely too smart for their ages, but they aren’t as smart as they think, or as advanced in their thought as in their vocabularies.  Hazel and Augustus are beautifully written, fully realized, heartbreakingly fragile characters who drive the entire gorgeous narrative.

Green also makes editorial choices that enrich our time with his characters.  He has something of a book within a book going on – both kids are enamored of a certain book that they feel very clearly understands them as cancer patients and expresses their world in a fundamentally truthful way.  They quote from the book, imagine the characters after the story’s end, yearn to know its author.  The book doesn’t exist except between the pages of The Fault In Our Stars.  Green created from whole cloth a book for his characters to read to each other, ponder and analyze.  In places there is a distinct knowing this fact – from a line or phrase that is too much like those we hear from our characters – which is a little distracting for a moment or two, but mostly, it’s seamless.

I can’t recommend The Fault In Our Stars more highly, or with more reservations.  It is without question worthy of 5 strong stars out of 5, but please be aware of the subject matter before you begin reading.  For some of you, it will simply be too much, maybe hitting too close to home.  You won’t be able to stop yourself from caring for these teenagers and feeling their pain and hurt and anger and love – sometimes things are too perfect to be tolerable.  I have perhaps never been so moved by a book as I was by this one.  Take that as both the high praise that it most definitely is, and also as a warning that reading this book will open you up to a world you’ll wish you had never seen.  In the end you’ll be grateful for the time you spend here, but it will come at a weepy, snotty price.