It’s hard to imagine what it must be like to grow up in the shadow of an internationally famous parent.  Even harder to imagine making the decision to follow in their career footsteps and face the inevitable comparisons. Author Joe Hill didn’t try and fight his author genes and only mitigated his unusual circumstances by not using the last name of his famous father when publishing his first novel, Heart Shaped Box.  Honestly, how hard would it be to get honest critical feedback on your ghost story if the entire world knew your dad was Stephen King?

But Joe Hill is the son of Stephen King, and chose to write in his father’s very famous wheelhouse.  Now years after the 2007 publication of Heart Shaped Box, everyone knows that.  I knew it when I picked up the book – so let’s do what comes naturally and compare father and son, shall we?

First, though, some basics.  Heart Shaped Box is a ghost story.  It doesn’t pretend to be anything else.  Main character Judas Coyne (aka Jude, nee Justin Cowzynski) is an aging, hugely successful death metal rocker with a series of young girlfriends he calls by the name of their home state, a ghoulish collection of death souvenirs, often sent by fans, a farm in the country and a sycophantic assistant who takes care of the business end of being an aging rocker.  It’s a good life, even if his very much hated father is dying.  That actually might make it even better – Jude hates the bastard for the years of abuse he suffered at the old man’s hands.

As we enter the story, sycophantic assistant Danny has just gotten word of a ghost for sale on the internet – exactly the kind of thing Jude would love to have in his collection.  You buy the suit, so says the ad, the nasty ghost comes with it.  Jude doesn’t believe it any of that, but it sounds like a great item to keep the cement strong on his badass death metal reputation.  Sadly for Jude, what he believes doesn’t matter one bit.  That suit is going to bite him in the ass and make him stand up and take stock of his comfortable, easy existence.

So what’s the verdict?  Is Joe Hill just a pale imitation of his father?  The answer is no, he most certainly is not, he is the real deal.  Heart Shaped Box is filled 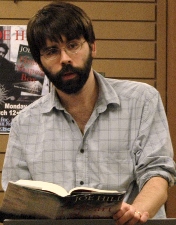 with plenty of supernatural horror (which I love, of course) and Hill puts together both a good cast of characters and a solid story to go with them.  The book is very well written, filled with both menace and a dry sort of humor that really establishes Jude’s character.  With his hardcore reputation, his big, bearded physicality and his affinity for the macabre, Jude is also just another 54-year-old man who loves his dogs and probably needs a colonoscopy.  Hill makes him a larger than life star, a jerk who takes advantage of his wealth and privilege, and a regular dude who just happens to have had an interesting career.  It’s a tricky balance and Hill pulls it together just right – strengths and weaknesses coming together to make a pretty likable protagonist.

His peripheral characters are by nature not as well developed, but he does a nice job making the current girlfriend, Georgia (aka Marybeth), into a mirror through whom we see Jude as a real person, someone to care about who does have something to offer beneath his public surface.

The plot does some nice twisting as we get to know both Jude and our ghost, who is one seriously nasty piece of work.  A ghost is one thing, a ghost with a personal vendetta is another thing altogether.

So, how does Hill measure up to the old man?  It isn’t a fair question, but it’s the one to which everyone wants to know the answer.  And the truth is that he holds his own just fine.  There are definitely shades of Stephen King sprinkled throughout his characters and situations, but it isn’t overt imitation – it feels more like osmosis.  You know, he was raised by the guy, sharing a home and a lot of genetics.  So to stumble across a scene, a character trait or even a turn of phrase that feels familiar is not only natural, it’s as it should be.  It means Hill is writing true to himself, rather than pushing so hard not to be his father that he isn’t allowing his work to reflect himself.

Heart Shaped Box is, in the end, a well imagined, solidly constructed ghost story with engaging characters, nasty bad guys and just the right amount of dry wit.  I thoroughly enjoyed the book and plan to read more of his work – not because he’s Stephen King’s son, but because he’s a damn good writer.  The apple may not fall far from the tree, but Hill is smart enough to be true to those roots and make them his own.  4 stars out of 5 and a solid recommendation for any ghost story fan.