I can’t believe I read the whole thing: Fallen Star 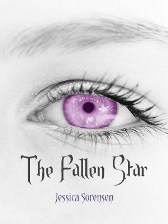 Take one Harry Potter rip-off.  Add one Twilight rip-off.  Sprinkle with one 12-21-12 doomsday scenario.  Grind it all in a poor grammar mortar with a typo pestle and…voila!   You have just hatched the entire 4 book Fallen Star series.  Magical!

For the sake of completeness, and maximum mockery, we will begin here with a review of book 1 – The Fallen Star, wherein we meet Gemma.  Gemma is our protagonist, she of the stunning violet eyes and emotionless, friendless, unpopular high school outcast life.  Gemma is different, you see.  As we enter her world she has begun to feel emotion for the first time, while living with her oppressive, unloving, cold and cruel grandparents.  She’s struggling to make sense of these new feelings as well as trying to deal with the ridiculously handsome new student to whom she seems inexplicably connected and undeniably attracted.

Oh, where to begin?!?  I’m sure you can guess that Gemma’s life is about to change, that she is more than she appears and that there are some paranormal adventures in store as she discovers a hidden world in which she is destined to play a major role.

It’s all been done, said and seen before.  There are vampires and witches and faeries and evil overlords all revolving in a grand plot which hinges on our young heroine, destined to either save or destroy the world.  There is not one single element to this plot that is new, creative or special in any way.

To add insult to injury, the book is spectacularly poorly written.  I don’t just mean shallow characters, inadequately explained plot points and story lines, and the obsessive use of the dues ex machina to resolve even minor conflicts.  Don’t get me wrong – those are all in here.  But as an additional special bonus we get errors in basic grammar, typos, punctuation errors and even some whole sentences that make little sense due to egregious word selection errors.  There aren’t just a few of these distractions – they are EVERYWHERE.  It’s as though the book was written by a hyperactive 12-year-old with big ideas, no spell checker, an F in English and an Irish Setter for an editor.  My daughter, whose notion of high literature is a six month old copy of Seventeen magazine, read one chapter and complained that “there sure were a lot of mistakes.”  Indeed, child, indeed.

And yet…I kept reading.  The Fallen Star is a lightning fast read that, despite its many, many, many, many faults grabbed me by the throat and forced me to finish.  And not hate it.  My current theories are that either 1) it’s pure brain candy – you don’t have to work at all to get your fix of a popular YA formula story or 2) author Jessica Sorensen is a massively skilled sorceress who is able to bewitch her bad writing and make it irresistible.  The verdict is still out on which of the two theories is most viable.

I can’t responsibly recommend The Fallen Star – it’s crap.  But I have to admit that not only did I finish it, I immediately downloaded the second book onto my Kindle.  The fact that The Fallen Star was free and book 2 was 99 cents definitely helped nudge my finger toward that “download now” button.  If you’re in the mood for some easy, senselessly addicting YA genre fiction, go ahead.  You’ll hate yourself in the morning, but you’ll gobble up every word.