This book is part of a series.  Do not start here.  These books in no way, shape or form stand alone.  If you must, start with Fearless, the first book in the series and move on, in exact sequential order, from there. 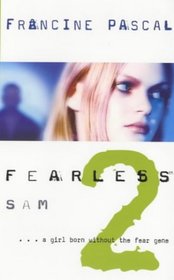 Sam is book two in the series that began with Fearless.  There is precious little introduction to the characters or the situation, so you really need to have read the first book or you’ll be hopelessly lost.  We enter the action almost exactly where Fearless left off, with a brief description of our heroine, Gaia.

Gaia Moore is a gorgeous, angry, parentless 17-year-old who is living with caregivers from her father’s past in New York City.  She has lightning fast reflexes and tremendous speed and power.  She has also been trained in many martial arts and other forms of combat.  She is brilliant.  And she lacks the gene for fear – at least for fear of physical harm.  Gaia is a ninja with a bad attitude.

In this installment she has a brush with death and while certainly not afraid (she is never afraid, and author Francine Pascal never misses an opportunity to point that out, even though her character’s actions contradict that notion repeatedly) she does have a moment of clarity in which she decides that before she dies she must 1) find her father and 2) have sex.

Oh, my God, how stupid is this premise.  If it wasn’t the second part of a series that was given to me as a gift by my children I would have chucked the book out the window upon the revelation that this installment was going to revolve around unlikable Gaia looking for Daddy while at the same time trying to lose her virginity with someone else’s boyfriend (Sam, naturally).  Also, she’ll need to escape from the skinhead carry-over from book one who tried to kill her in the first chapter.  Of course.

Gaia started out the series in the first book struggling to overcome her own lousy personality in order for the reader to not wish her a swift, painful death.  She continues that struggle here as she repeatedly acts impulsively, stupidly and with complete disregard for anyone but her own needy, sad sack self.  She may be a ninja, but she’s the whiniest ninja of all time.  She continues to be thoughtless to the point of cruelty towards her friend Ed (who is hopelessly and unrequitedly in love with her) as well as rabidly pursuing a boy with whom she has almost no history, except for their amazing, powerful and completely ridiculous “connection”.

Again, as in Fearless, the only thing keeping this book from being a total disaster is the background plot.  We get quite a bit more information about Gaia’s father here (and that’s definitely interesting), and some more tidbits about Ed’s accident and his relationship with Gaia-nemesis Heather.  But it’s the shadowy background figures, still pulling stings unnoticed by the main characters, who command the most attention.  Are they from the CIA and linked with her father?  Are they a part of the white supremacist group Gaia has been battling in her favorite NYC park?  The teen romance and surly Gaia issues are partially meliorated by the overarching story now forming – she is part of something much larger.

So here in this second book in the series we have something of a conundrum.  The basic premise as presented in the first chapter is hideous, yet Sam develops along more than just the shallow notions of seeking parents and losing virginity.  Once again, it’s a fast read and I was able to resist the urge to hate Gaia as the more interesting issues of her past and murky pursuers came into focus.  Sam isn’t really a good book, but it becomes better as it progresses, garnering it 2 ½ stars, but still a recommendation only for the hardcore YA reader.

Do yourself a favor – buy the edition with the first three books all in one volume (the link below will take you to it on Amazon).  You’ll hate yourself in the morning, but you’ll want to know what happens after books one and two.