Teen Ninja On The Go 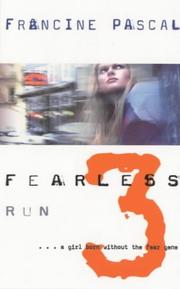 This book is part of a series.  Do not start here.  These books in no way, shape or form stand alone.  If you must, start with Fearless, the first book in the series and move on, in exact sequential order, from there, to book two, Sam, and then on to this one, Run.  To do otherwise is to be hopelessly lost from word one.

And we’re back with more Gaia intrigue!  That’s right, it’s book three in the Fearless series featuring grumpy, selfish, moody, teenage ninja Gaia Moore.  Our heroine was born without the gene for fear (hence the title of the series) and was trained by her CIA agent father in all sorts of combat so that she wouldn’t get hurt.  She was also trained because along with her lack of fear she’s super fast, has amazing reflexes and is stronger than ten Spocks.   Oh, and she’s beautiful and brilliant, but doesn’t know it – so she doesn’t fit in at school and has made an enemy of the popular girls by being too awesome.  Right, I don’t care for this character.

So why am I on the third book in the series?  First, they were a gift.  Second, they came in a single volume.  Third, there’s something addicting about the fast paced, spooled out secrets of Gaia’s past and parentage and  the danger (which now has a face) that lurks, waiting to do who knows what.  In this installment, the boy to which Gaia is inexplicably drawn (Sam), feeling an intense connection despite his being a virtual stranger (barf) has been abducted and the bad guys are forcing Gaia to perform a series of horrible tasks in order to win his freedom.  Sam is a diabetic and his time is running out – they want to know just how far she’ll go to protect this boy.  Turns out she’ll go pretty far.

Don’t be fooled into thinking that with Run, author Francine Pascal has turned this series into all high stakes intrigue.   Not at all.  There is still plenty of high school drama, puppy love misunderstanding, false feeling bravado, false feeling empathy and general overall false feelings.  That’s mostly attributable to the character of Gaia, who though she might be a ninja, is not at all likable.  She’s exactly the opposite and that hasn’t changed since book one, Fearless.  By not endowing her heroine with anything remotely resembling a charming personality, she’s sabotaged the rest of what might have been a good story by saddling us with a main character that is difficult to root for.  She also mismanages her basic premise time and again by having Gaia feeling all sorts of types of fear – just not fear of physical harm – and then claiming that she never, ever feels fear of any kind.  It’s contradictory and makes Gaia seem like an even bigger asshat in the process.

Run is the kind of book that you will read if you’ve read the first two – Fearless and Sam.  Not because it’s good but because you’ve come this far, you’ll want to know how it turns out.  It’s worth the few hours it will take to do so, but not much more. There are more books in the series (30+ more books, believe it or not) – undoubtedly continuing the asinine love triangle filled with missed opportunities and stupid misjudgments – but after Run, you should be able to put it down and quit.  It has a satisfying enough ending to free you from the need to go on just to resolve the issues posed in the first books.  They aren’t all resolved, of course, but well enough to let you out of their God forsaken noose and leave you to read better things.  For that alone I thank Pascal.  2 stars out of 5 and a recommendation only for those readers who seriously dig their YA action/romance and surly teenage heroines.

Do yourself a favor – buy the edition with the first three books all in one volume (the link below will take you to it on Amazon).  You’ll hate yourself in the morning, but you’ll want to know what happens after book one.