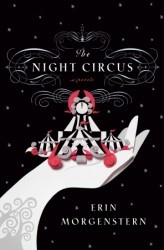 We often see really good books referred to as “page turners”.  The kind of book you can’t wait to pick up and don’t want to put down.  I have to admit that I gravitate toward exactly that type of novel.  But there are times when a change of pace catches me by surprise and turns my usual frantic reading into something more leisurely and romantic.  Night Circus by Erin Morgenstern is a most welcome deviation into the mystical and mysterious world of a particularly special circus.

Night Circus begins with a simple concept – that there is magic in the world.  In this case the magic begins with a wager between two men – one a performer, the other a complete enigma.  It seems that they have had such wagers – contests – in the past.  They each choose a contestant and decide on an acceptable arena and then embark on pitting their magical abilities against one another in the form of their students’ competition.

If things were that simple, the book would be boring, of course.  But our two instigators begin with the rawest of raw materials in choosing their students – children.  In the case of Hector Bowen (stage name Prospero) it is his young daughter who showed very special abilities from a very young age.  In the case of the mysterious Alexander (no stage name, not even a last name) it is an orphan.  Prospero and Alexander, it seems, delight in pitting “natural talent” against “training”.  Their protégés learn very different styles of magical illusion.  That’s what makes the contests interesting to their instigators.

The arena in this challenge is a circus.  But not any circus – one that opens only at night and is called Le Cirque du Reves – the Circus of Dreams.  Enlisting the aid of accomplished theater producer Chandresh Christophe LeFevre, the men manage to get others to build for them an elaborate arena in which magic is mistaken for illusion and that takes on a life of its own, completely separate from the two men and their whims.

The story of the circus (and the challenge) is told from the perspective of various characters in various time periods.  In general, the entire story takes place in the late 1800s and very early 1900s in London and on the East Coast of the United States.  Some chapters are told by the two contestants – Celia and Marco.  We learn about their childhoods, how they learn and practice their crafts and how their lives are controlled and driven by a challenge about which they have very little information.  What they glean from their mentors is all they have to figure out how they must use their skills within the circus in order to keep the game afoot.  They don’t know why, they are simply doing what they have been trained, for their entire lives, to do.

The result is a marvelous, captivating and completely enchanting circus unlike any other.  It is open to the public, has many performers and inspires admirers from around the world – people absolutely devoted to the circus and its magical mysteries.  When we aren’t with Celia or Marco or inside the circus and its various machinations, we glimpse it from outside, from the perspective of a visitor who finds himself wandering the absolutely magical pathways from tent to tent, absorbing the sights, sounds and smells of this singularly magnificent, ephemeral Night Circus.  To say that there are things here that are beyond easy explanation is to be mild to the point of being obtuse.  The visitor believes it is all illusion because that is what he wants to believe.  To see or accept the truth that is, really, right in front of him, would be to admit that the world is nothing at all like he imagined it to be – a leap of faith that few if any will ever fully make.  We get to know a few of the special people who either help build and maintain the non-magical parts of the enterprise or who simply understand on a basic level that it is much, much more than it appears.

Night Circus is beautifully written, with a dreamy quality to the prose that makes the circus in particular feel slippery and soft, vague and enticing.  The main characters of Marco and Celia are developed from childhood forward – not thoroughly, but well enough so that we feel we know them but do not know all of their secrets.  The rest of the characters add depth, charm and intrigue to the circus setting.  I have no love for or interest in circuses in a general sense, but this is a special circus.  I love the description of each magical, marvelous tent, each with surface appeal and many with an underlying bit of menace that keeps prying visitors from getting to close.  As we weave through the pathways, tents and exhibits with either patrons or members of the troupe, we learn and absorb and become deeply invested in both the challenge and the circus.

This was described to me as a book that is “weird, but in a good way”, and that is certainly true.  It bounces around in time, the narrative point of view changes frequently and I had to look back any number of times to really figure out the time sequence of the events.  But I thoroughly enjoyed the entire experience.  Morgenstern has enough confidence in the pull of her characters and the strength of her story that she lets chapters end without cliffhangers, knowing that eventually we’ll be pulled back to the circus, even if we don’t fully understand it.  It took me several weeks to finish Night Circus – it isn’t a book that will be rushed – it is a book to be savored, imagining that we can understand the shadowy world of magic running beneath every turn of every events, prying clues from the cryptic narrative and eventually understanding more than we thought possible at the beginning of the whole enterprise.  It’s an absolutely absorbing, entertaining read, one to be undertaken when the reader is not in a rush to end but instead is willing to stop and experience the wonder that is the journey.  Highly recommended, 4 ½ stars out of 5.