Love You Hate You Miss You

One of the issues I frequently see in Young Adult fiction is that the characters think, speak and act too much like adults.  A 14-year-old too often sounds more like my friends than my daughter.  I understand the desire of authors to avoid 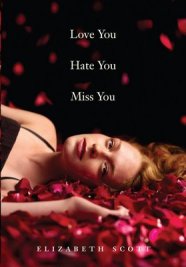 talking down to their audience, but in the process I think they sometimes lose credibility with the same kids by sounding too much like an adult telling kids how they should feel.  Avoiding this large, difficult to escape pitfall is the greatest strength of Love You Hate You Miss You.

Author Elizabeth Scott presents to us the story of Amy.  Amy is a high school junior, tall and with the kind of red hair that makes her stand out against her will.  She narrates the book in the first person and through a series of short letters to her friend Julia.  Julia is gone.  Amy just got out of rehab.  This is not a fairy tale world.

As Amy tries to go back to living a life that is irrevocably changed after an incident several months in the past, we come to know her.  She’s insecure, battling temptation to fall back into old habits and, above all, lonely.  She misses her friend with an aching, searing emptiness that she is certain nothing will ever fill or change.  She hates her therapist, her parents and the kids at school, but mostly she hates herself.  Julia is gone, she knows, because of her.  Nothing will ever be the same.

Gradually, we learn about Amy and about Julia.  About their friendship and how it ended.  As Amy talks we hear, vividly, the voice of a sad, lonely teenage girl.  She doesn’t have the reasoning ability of an adult, she sees things through a lens of youth that lends itself to absolutes and misinterpretations.  She hates anyone and anything that challenges her perception of the ways things are, and especially if they dare challenge the way things were.  She sees Julia as everything good and right and beautiful and herself as the opposite and it’s clear that she’s been doing that for far longer than Julia has been gone.  As the story progresses Amy has to learn to live without Julia, come to terms with herself and try to move out into a world in which she has never felt she belongs.

Love You Hate You Miss You is heartbreaking in so many ways – the stupidity of youth, the permanent consequences of stupid mistakes and the soul crushing certainty Amy has that she will never, ever fit in, anywhere, while everyone else does so with such ease.  Adults will read her words and want to tell her that everyone else feels exactly the same way, but Scott doesn’t take the easy way out and have Amy come to an adult realization about her life and herself esteem.  She leaves her be who she is – an insecure young girl whose mooring has been severed, leaving her vulnerable, irrational and uncommunicative.  As an adult reader I empathized with the adults trying to reach through her shroud of youth, only to be rebuffed time and again.  I also remember being her age and that nagging feeling of always being on the outside, never comfortable and always wishing to be different.  Scott does a beautiful job presenting a tragic story and a very real, very hurt little girl dealing with a situation far beyond her years.

My single complaint is that in so thoroughly diving into the teenage world, Scott presents the adults as rather dim and stupid.  That’s how Amy sees them, so that’s how we see them.  At some point it would have been nice to see her recognize the power of her actions on the adults in her life and accept her role in the dynamics of her relationships.  That’s a pretty small complaint, overall, but one that will probably nag at older readers, especially as her incessant insistence on the idiocy of adults goes largely unchallenged.  The greater story, though, is sad and topical and perfectly told for a teenage audience.  Scott is the rare YA author who truly remembers what it’s like to be a teenager.  4 stars out of 5 and a hearty recommendation for YA fans.