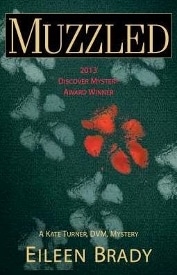 Being a small town veterinarian seems like an impossible job.  You can’t specialize in a single species, or even a group of species, since it’s just you and all those animals.  Who has room in their brain for enough information to treat both horses and parrots?  Dr. Kate Turner, that’s who.  She’s the star of the new cozy mystery series by Eileen Brady that begins with Muzzled.

Kate is new to Oak Falls, NY.  She’s taken a year’s contract to fill in for the small upstate town’s only vet while he travels the world by cruise ship.  A few months into her new job, which includes making house calls, she is unlucky enough to visit the temperamental owners/breeders of 27 Cavalier King Charles spaniels.  She is even more unfortunate to find them both dead.  She’s new in town, she found the bodies, and the couple was mad at her for shaving a small spot on their champion’s leg for an IV.  No one really treats her like she did anything wrong, but she feels bad anyway.  She also feels like there’s something not right about the scene of those deaths – even though it looks like a murder/suicide she’s sure there was someone else in the house.  As she tries to gain her footing in her new job, get along with her irascible office manager, and repair her broken heart from her last relationship, Kate also begins doing a bit of nosing around.

So Muzzled has a pretty standard set-up for a first book cozy.  We meet our protagonist, learn about her job, meet some of the quirky characters she has to endure and solve a mystery.  As I always say, the key to a successful cozy is in the characters, and I must say that I like Kate Turner very much.  She’s smart and relatively level headed and her sleuthing doesn’t have that artificial feel to it that can bring a cozy to a grinding halt.  She has relatively rational reasons for her actions, which is a lot more than can be said for many cozy heroines.  Her veterinary practice holds lots of promise for future installments as she deals with much more than kittens and canines.  And her disentanglement from her former boyfriend leaves open the possibility for future romantic sub-plots without author Brady spending too much time wallowing in romance and ignoring her story.

Overall, Muzzled is a very good first book from Eileen Brady.  It has a pretty solid mystery, an interesting locale and basic premise for the series and a very likable main character.  I look forward to more books in the Kate Turner series.  4 stars out of 5 for this debut novel.

My thanks to Maryglenn McCombs and Poison Pen Press for the review copy of Muzzled.