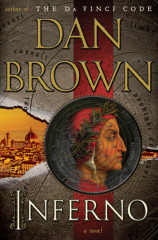 Robert Langdon is back!  I haven’t personally seen our Harvard professor and expert in symbology (and history, art, architecture, the infrastructure of every city on the globe and pretty much whatever else is needed in the moment) since The Da Vinci Code, but I know he’s been around.  Inferno has Langdon waking up, dazed and drugged, in a hospital.  He has no idea how he got there, but it’s clear he’s been injured.  As the hospital staff fills him in on his dramatic appearance on their doorstep the previous night, he realizes that he’s in Italy – and remembers nothing of the past two days.  His last memory is of strolling through the campus at Harvard.  Soon enough it becomes clear that he’s involved in something dangerous (an assassination attempt is a good clue) and he flees into the Florence streets with pretty young doctor Sienna Brooks as his only link to his broken memory.  What follows is a life or death chase (and search) for the work of a madman – one that involves Dante, covert operations, secret organizations and lots and lots of symbols.

I refuse to be a Dan Brown hater.  Yes, this book, like The Da Vinci Code (and reportedly all of the others) is filled with hyperbole, purple prose (his nemesis BELLOWS WITH RAGE!), ridiculous coincidence and a main character that pauses in the middle of a fight to save the world to lecture the reader on the history of a museum.  Theoretically that should all be bad.  But Brown somehow manages to combine it all with a plot that has enough hooks to keep you reading, eagerly.

I think what made me enjoy Inferno is the combination of over writing and clever plotting.  It’s ever so much fun to have a protagonist who 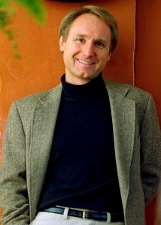 dwells on his wardrobe while deciphering a code hidden within a painting rendered in a projection.  Or learn the history of St. Mark’s Basilica while we race through it to escape machine gun toting bad guys bent on world destruction.   There’s a joyful enthusiasm in this book – for the history, art and architecture featured, and for the action hero plot that Brown uses to push his character through Italy.  I really have no idea how much of his detailing of historical events involving buildings and relics is accurate, but it feels legitimate and that’s what counts.  We like to think our professor is the real deal and that he knows pretty much everything about everything – we’re never surprised when he pulls a symbolic rabbit out of his hat in the form of one archaic piece of knowledge or another.

Inferno isn’t going to be a book that appeals to the literati.  It’s a mass market thriller written for airplane rides and movie adaptations, and you have to read it with your disbelief set high on a shelf.  If you go into it knowing that it’s more or less Faux Indiana Jones Does Symbols, it’s a fun, high energy read that is perfect for the plane, the beach, the unexpectedly free afternoon or any time you want to put your brain on half strength and enjoy someone else’s frenetic ride.  4 stars out of 5 and an enthusiastic recommendation for Inferno, one that almost BELLOWS WITH RAGE!