A Killing Game, That Is 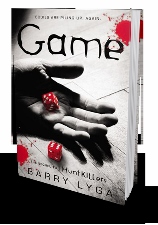 Just when you think you know what you can expect from a man he throws you a curve ball.  You think you can trust him, you let your guard down, you let yourself dream of a future of satisfying horror stories and then, out of the blue, he does something terrible.  Unthinkable.  Almost unforgivable.  That’s right; he ends a book with a cliffhanger.  Oh, Barry Lyga, I thought I knew you better than that.

Game is the sequel to Lyga’s excellent YA horror novel I Hunt Killers.  He set up a terrific cast of characters in that book – Jazz, the son of an infamous serial killer, his best friend Howie, a brittle hemophiliac, and straight shooting girlfriend, Connie.  He placed them in a story that allowed them to develop, reveal Jazz’s past and let us imagine the horror of being raised by a maniac.  Perfect set up for a series, and I was excited to see that there was a sequel.

In Game, all three main characters are back, as well as Jazz’s murderous father, Billy Dent.  This time around, Jazz is summoned to New York to help with a murder investigation.  That seems odd for a 17-year-old with no training, but not everyone is the son of Billy Dent – the son who Dent thought would be his protégé, the son to whom he revealed all his tricks, passed on all his wisdom, groomed to be his successor.  Jazz understands serial killers and he’s good at catching them – he proved that in the last book.  It is a little far-fetched to imagine any police officer calling on him to actually assist with a case, but this is fiction and the characters are so good that I was able to roll with the somewhat outlandish premise of the story.

Anyway, Jazz is helping investigate a series of brutal killings and his father is still playing with his head, despite having been arrested 4 years previous.  Billy Dent is a truly nasty piece of work and understanding him, being able to relate to him and his ilk, and the fear of becoming like him mess with Jazz incessantly.  He continues that struggle here, but without Howie and Connie by his side (they have their own battles to fight back home) it’s even harder for Jazz to remember that he does not have to be his father’s son.

The story here is great.  Jazz is put to work again using his unwanted set of skills to track down a serial killer.  The bad guy is truly bad, the 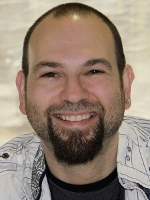 horror is well written and graphic.  Lyga does not talk down to his YA audience, but these books are not for young teens or the squeamish.  Know going in that it’s written for high school aged kids (and adults, of course) with some experience with horror stories. Jazz remains compelling, sympathetic and a little scary.  His father remains horrifying, and the new killer tries hard to live up to Billy Dent standards.

But the end.  Oh, Barry Lyga, how could you?  I Hunt Killers gave us a series opener that was both a satisfying self-contained story as well as a set up for future installments.  Game ends with a giant cliffhanger.  Not even a cliffhanger, it ends in the middle of everything.  I knew with 50 pages to go that there was no way it was all going to wrap up and kept on reading with dawning horror as the true level of cruelty revealed itself piece by piece and I was left dangling from the precipice screaming NOOOOOOOOOOO!  Fine, not really, but it’s a big cliffhanger and the third book not only isn’t out, it isn’t even named or really scheduled.  The only thing I could find was a projected date for some time in 2014.  I suppose it’s a sign of a good book when I can’t wait to get my hands on the next one to see what happens.  But Lyga doesn’t need this sort of trickery – it’s beneath his skills as a writer and honestly I’m disappointed that he chose to go there. Game is still a top notch thriller for older teens and adults – 4 ½ stars easy – but I’m going to suggest you hold off reading it until the third series installment is published so you can actually read the whole story. I wish I had.